TOM’S 10: A ticket scam to watch for, new Strokes for folks, and see some iconic photos of Elton John 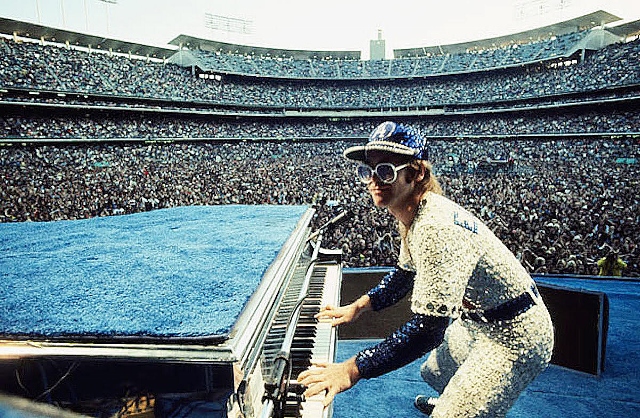 1. Buyer beware! That’s the advice of Rob Warwick, whose concerts are featured here on this Rock.It Boy website. All of Rob’s many concerts and presentations are postponed until at least June 30, due to the COVID-19 pandemic, but he tells me the story of how one show, “Menopause The Musical” at Abbotsford Arts Centre in September, caught one ticket-buyer in a bit of a scam. “Somebody ended up paying $275 for tickets that normally cost $55,” Rob says. “So I look into it, and they were directed to a resale site that has no affiliation with Ticketmaster or me or anyone,” he explained. “So I go Google my show, and the first thing that pops up is tickets for sale at this other site. So what happens is these resellers will buy tickets to a show of mine, and then spend a shitload of money on Google so their listing shows up at the top of searches for that show. It’s pretty shitty, and it’s a buyer-beware thing I want to let people know about. I want to put it out there, because the average person might not know that this happens. I mean, that’s more than four times the price!” Of course, the best place to get the REAL ticket info is right here at rockitboy.com.

2. The damned coronavirus has killed Adam Schlesinger, leader of the power-pop band Fountains of Wayne. If you don’t know Schlesinger’s name, you have probably heard his music in one medium or another. One of his most clever songs is “That Thing You Do,” which served as the sole hit for the Wonders, the fake band in Tom Hanks’ film of the same name. In real life, the track charted well and earned Schlesinger an Oscar nomination for Best Original Song. The track brilliantly captures the Beatles-esque sound of the 60s, and is catchy as hell. If you haven’t seen it, the movie is a ton of fun to watch.

3. The Strokes were all the rage at the turn of the millennium with “Last Nite” and other New York hipster sounds, and they’re back with the band’s first album in seven years. “The New Abnormal” was recorded at Shangri-La Studios in Malibu and produced by Rick Rubin. “At The Door,” the first track released from the album, debuted during the band’s performance at a rally for Bernie Sanders, who has since dropped out of the race for the Democrat party’s candidate for U.S. president. If you haven’t seen or heard it yet, check out the retro, 1970s-vintage video for the album’s first single, “Bad Decisions.”

4. In one of the more surprising career turns in rock music recently, Anthrax singer Joey Balladonna has formed a Journey tribute band. I first heard the news on the great SiriusXM station, Volume (106 on the dial), billed as the first-ever all-talk radio channel dedicated to the topic of music. “I am happy to announce the debut of Journey Beyond, a tribute to the legendary band Journey,” Balladonna posted to social media. “It is my pleasure to welcome my new band out of Nashville and we are very excited to hit the stage together.” Journey Beyond’s first gig was in early March at The Beacon Theatre in Hopeville, Virginia (video of the full show is posted below). As for Anthrax, word is the began writing songs for a new record at the beginning of last year, as a follow-up to 2016’s “For All Kings.”

5. Originally created as a hobby project in 2000 by Kevin Lewandowski, the Oregon-based Discogs (https://www.discogs.com) is on a mission to build the biggest and most comprehensive music database and marketplace. So far, more than 510,000 people have contributed some piece of knowledge, to create a catalogue of more than 12,340,000 recordings and 6,798,000 artists. It’s impressive stuff, and the data-mining has resulted in projects such as Discog’s list of “The Best Albums of 1970.” It was a landmark year of releases, including The Who’s Live at Leeds, Van Morrison’s Moondance and, at #1 on the list, Led Zeppelin III. That album’s softer “side two” is my favourite, and the acoustic beauty “That’s The Way” is near the top of my list of best Zeppelin songs, ever. Love this song!

6. Have $30 million you’re just itching to part with? You could buy the Los Angeles-area mansion once painted purple by Prince. It become one of the most infamous house-painting jobs in L.A. history when it was owned in the mid-2000s by NBA star Carlos Boozer. The story goes, Boozer leased the Belair estate to his musical idol for a year, for $95,000 a month. During that time, Prince completely redecorated the place and brought in black-and-purple furnishings, among other changes. “The weight room was now a disco dance floor with a DJ booth and his bedrooms converted to a hair salon and massage parlor,” according to a post at toptenrealestatedeals.com. “Boozer called ‘foul’ and threatened to sue, but Prince soon returned everything back to the way it was when he first rented the home. The two became best friends up until Prince’s death in 2016.” Now for sale, the home “was designed for entertaining and saw many a grand party over the years, including a few Prince concerts for his friends.” Boozer tells the entertaining story in video posted below.

7. I had no idea Jewel is a long-time mental health advocate, and her recent ”Live From San Quarantine” concert on Instagram proves that the Grammy-nominated singer/songwriter has her heart in the right place during the COVID-19 pandemic. The kickoff concert raised a cool $550,000 for at-risk youth – those dealing with anxiety, depression and isolation. “I consider this pandemic to be an historic and monumental opportunity for everyone in society to give to one another and to redefine what community is all about,” said Jewel, who has helped develop an online resource called JewelNeverBroken.com. Hearing about all this reminded me of the time Jewel, disguised as a mild mannered businesswoman, dropped by a karaoke bar and performed some of her own songs to a completely dumbfounded audience. Below, check out the amusing video, posted to the Funny Or Die YouTube channel 10 years ago.

8. If you want to see some amazing photographs of rock stars, head on over to Morrison Hotel Gallery. The portal represents more than 125 of the world’s best music photographers and their archives, with 100,000-plus images searchable by photographer, music artist, band or concert. Opened on April 2 is a month-long look at Elton John in an exhibit called “SIR: A Retrospective of Rock Royalty,” with shots by Terry O’Neill, Ed Caraeff and Norman Parkinson. One of the most iconic photos is one O’Neill took of the Rocket Man during his sold-out Dodgers Stadium show in L.A., where Elton dressed in a Bob Mackie-designed sequined baseball uniform for the night, in 1975. Really like the photo? You can buy it for $3,150. The drug-fueled craziness of the show is captured in the video below, which includes tennis star Billie Jean King singing background vocals

9. Fans of David Bowie might want to book a ticket for “A Bowie Celebration,” a concert tour of North America that has been rescheduled for dates in September due to, what else, the current coronavirus shit. So far, the only Canadian date is planned in Toronto. The thing that makes this theatre tour special is the spotlight on many of Bowie’s musical collaborators, including tour band leader Mike Garson, a keyboardist who gigged with Bowie at more than 1,000 concerts. Other band members include Carmine Rojas, Kevin Armstrong, Alan Childs, Corey Glover, Sass Jordan and Joe Sumner (yeah, Sting’s kid). The tour will focus on the Bowie albums “Ziggy Stardust and the Spiders from Mars” and “Diamond Dogs,” so the song selection is can’t-miss. Like so many things in our uncertain world, hopefully the tour happens. The video below captures the band live in London.

10. One to watch for is Storry, a Toronto-area musician nominated in the Reggae Recording of the Year category at this year’s Juno Awards. Her latest collection of songs is launched by “Up,” a piano ballad in 3/4 time signature. Most interesting is the claymation video for the song, which keys on how a man’s insatiable appetite gradually destroys his relationship and entire surroundings. The video for the track, released in late March, was filmed over four months in Storry’s basement alongside a small team with zero training in film production or animation. Storry (born Dina Koutsouflakis) has an interesting, ahem, story, as she’s a former stripper who has found her voice as a musician who pulls from a wide range of influences, including hip-hop, opera, reggae and musical theatre. “I hope this video rings true in the hearts of those who watch it, in a world where more is more and less is not good enough, new is better and what becomes old is an increasingly shorter window,” she says. “I hope that people will laugh and cry and leave changed. Because what is art if it doesn’t make us feel and ask important questions?”

Check back here at Rock.It Boy Entertainment for Tom’s next Top 10.