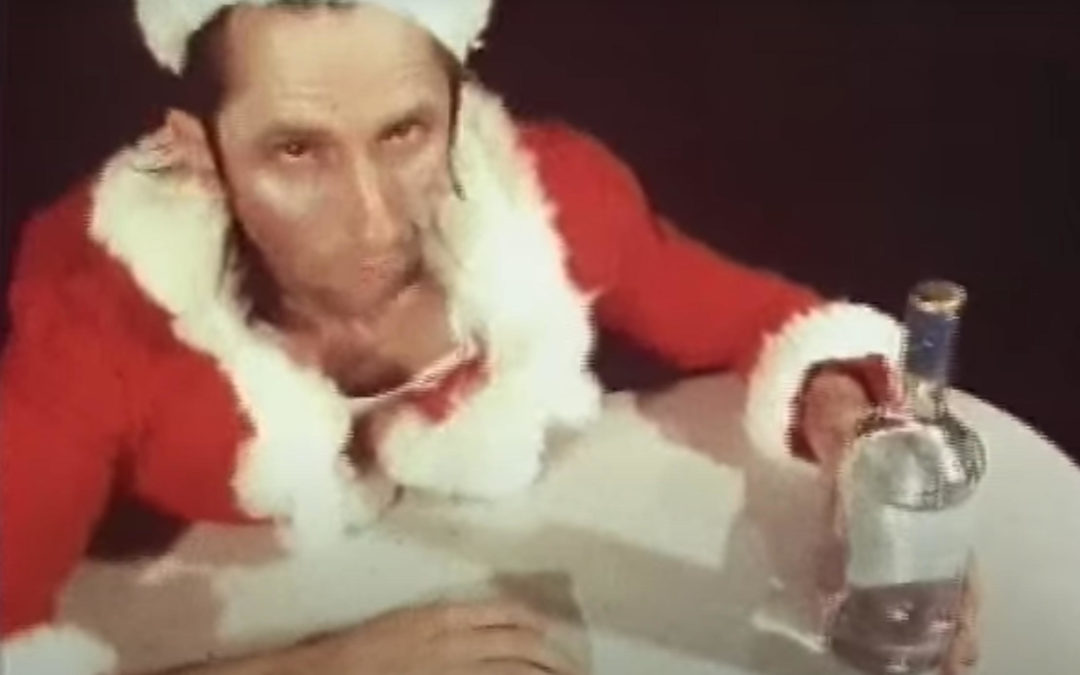 Photo credit: A scene from the video for Mental As Anything’s trippy song, “Apocalypso (Wiping the Smile off Santa’s Face),” from 1984. (Credit: YouTube.com)

I’m not really big on Christmas songs in the traditional sense (you know, those played over and over again right now), but I do dig offbeat ones. Like, I’m OK with not hearing Mariah Carey’s “All I Want for Christmas is You” or Wham’s “Last Christmas” ever again.

And so, I present this list of twisted holiday music that makes me want to jingle my bells. Enjoy!

The José Feliciano classic is given a rough ride by El Vez, a Mexican-American who gets all Elvis with some of his humorous songs. This one surf-rocks with slashing guitars — perfect for waking up your kids on Christmas morning (or maybe not).

I grew up loving Cheech & Chong comedy albums, including 1980’s Let’s Make a New Dope Deal. One great skit had Chong playing ill record producer Moe Money and Cheech as annoying Saul Pushman, who has a song he wants poor Moe to hear – a punk-rock version of Rudolf The Red-Nosed Reindeer, recorded by Ronnie Runt and the Runt-tones. Cheech does a pretty fine Johnny Rotten impression.

3. “Apocalypso (Wiping the Smile off Santa’s Face),” Mental As Anything

A New Wave band from Australia, Mental As Anything made this anti-nuke song in 1984, at the height of Cold War tensions between the U.S. and Soviet Union. They even made a bizarre video for the track, with claymation, a painted red devil and drunk guys wearing Santa suits.

Clocking at a just over two minutes, Carter’s 1968 original oozes bluesy soul and a cool horn riff (later sampled by Run DMC for their “Christmas in Hollis” hit), but man, those are some sexually suggestive lyrics. Ol’ Saint Nick only comes once a year, but this Santa sneaks around and drops by to please the ho-ho-ho’s in the ‘hood. Most cringe-y are these lyrics: “I make all the little girls happy, while the boys are out to play.” Um, OK then. “‘Baby It’s Cold Outside’ is amateur-hour compared to this,” says one YouTube commenter. “Sounds like a title for a porno movie,” says another. You decide.

5. “Christmas With the Devil,” Spinal Tap

“The elves are dressed in leather, and the angels are in chains,” starts Spinal Tap’s “Christmas With Devil,” which rhymes “silent night” with “violent night” and plods along on volume 11, in ‘80s headbanger style. Check out this video from the band’s 1992 reunion movie/concert.

During the mid-1990s lounge/swing music revival, Toronto’s Jaymz Bee was having fun with such retro sounds. I remember going on some kind of harbour cruise/party where Bee performed, and I won a 10-disc CD player. It was great. Anyhow, this ‘60s-influenced number was an oddity on A Christmas Cocktail, which featured plenty of weirdness. But “Space Age Santa” might be the weirdest.

Not so much of a song as a tuneless, noise-rock story read by Thurston Moore (I think), this one was included on a mid-90s compilation called Just Say Noël. It’s a cover of a 1972 Martin Mull song (search it up), but Sonic Youth’s version is just plain drugged-out.

The alt-rock Just Say Noël album was a delight because it featured trippy holiday treasures by XTC, Elastica, The Roots (“Millie Pulled a Pistol On Santa”) and more. My favourite track of the bunch might be Beck’s woozy “Little Drum Machine Boy.”

9. “If it Doesn’t Snow for Christmas,” Joe Pesci

It’s a song that should have been featured in a “Home Alone” movie, except for the F-bombs Pesci sings as if he were in “Goodfellas” character. The album Vincent LaGuardia Gambini Sings Just for You, inspired by his role in “My Cousin Vinny,” was released in 1998.

“Oh, Santa he’s a big fat fuck, went down the chimney got his fat ass stuck,” sings Folds on this fun little number, released in 2002. “Oh honey call the lawyers fast, ’cause Mrs. Claus is gonna sue my ass.” Merry Christmas, everyone!