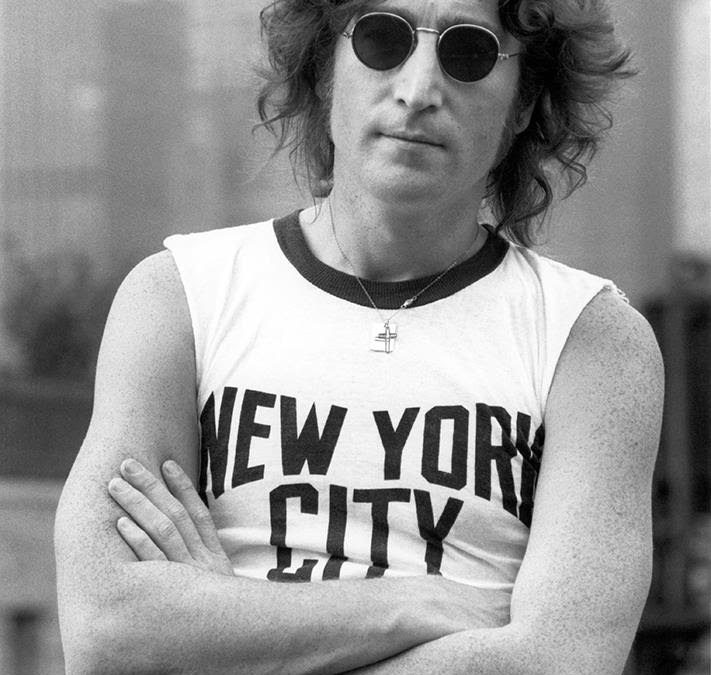 1. John Lennon would be 80 years of age on Oct. 8 this year, had he not been gunned down in cold blood on a New York City street 40 years ago. In a birthday celebration for the best Beatle, photography agency Morrison Hotel Gallery reimagines what it means to be a dreamer in the digital age with “In His Life,” a virtual exhibition launched Oct. 1 at morrisonhotelgallery.com. Featured photos of Lennon were shot by Bob Gruen, Ethan Russell, Astrid Kirchherr and Allan Tannenbaum, among others. Gruen’s photo of Lennon in a sleeveless “New York City” T-shirt is among the most iconic images. Also displayed are four of Lennon’s original handwritten lyric sheets (“Yer Blues,” “I’m So Tired,” “Dear Prudence,” “Watching the Wheels”), made available in limited-edition fine art prints by the John Lennon Estate on behalf of Yoko Ono.

On a related note, also in honour of Lennon’s 80th birthday, the John Lennon Educational Tour Bus and John Lennon Songwriting Contest (jlsc.com) have announced a partnership with Gibson Gives, the guitar-maker’s charitable arm, to sweeten the winnings of the contest with a couple of sweet guitars. Songwriters, artists and bands can enter the 24th annual JLSC, with more than $300,000 in cash awards and giveaways.

2. Check out the fascinating music documentary “Who Let The Dogs Out,” the story behind the 1998 hit song by Bahamian group Baha Men. Director Brent Hodge peels back layer upon layer of the song’s origins, based on the cultural explorations of Ben Sisto, who spent nearly a decade investigating the roots of the melody, lyrics and rhythms. A number of composers claim ownership, and it’s fucking nuts how many versions are out there, for all to hear. This movie is well worth the investment of an hour of your time, even if you hate the ear-worm of a song.

3. This is the 40th anniversary of the release of the legendary “Back in Black” album, and it sounds like AC/DC is getting ready to release new music, along with a video of some kind. A fan site in Brazil screen-shot photos on the band’s website showing Brian Johnson, Phil Rudd, Cliff Williams and guitarists Angus and Steve Young in action, before the photos were quickly removed from the website. It’s believed that the band had done some recording in Vancouver back in 2018, so this could be the result of that. It’s all documented on this website.

To the greatest fans in the world – we say THANK YOU 🔥⚡️#backinblack40 pic.twitter.com/psbL0RYq1V

4. The final 10 songs recorded by Gord Downie are being released as a double album due out Oct. 16 on the Arts & Crafts label. Electric and acoustic versions of the songs are featured on “Away is Mine,” which was recorded at the Tragically Hip’s studio in Bath, Ontario, just a few months before Downie’s death in October 2017. “This won’t be his last release, but these are the final 10 songs Gord sang before he passed away, the last time he ever sang into a mic,” longtime friend/co-writer Josh Finlayson and brother Patrick Downie wrote in a joint statement. “That’s pretty special to us.” Sessions began on July 17, 2017, with producer/mixer and Bathouse in-house engineer Nyles Spencer at the board. The album came together in a burst of live takes over the next four days. “There really wasn’t a plan to make a record,” Finlayson added. “The whole thing was that I knew this was a great way to spend time with Gord, listening to music, talking about music, talking about things that we’d always talked about. And this just evolved pretty organically.” All the details are posted to gorddownie.com.

5. Speaking of Downie and the Tragically Hip, this fall Cineplex is showing a special double feature of the band’s films, “Long Time Running” and “A National Celebration,” in select theatres across Canada, with “exclusive merchandise” to commemorate the occasion. Clocking in at four hours and 33 minutes, the double feature is indeed a long time running. Details at Cineplex.

6. About a month after Charlie Daniels died in July, Nickelback paid tribute by posting video of a ripping version of the country fiddler’s “The Devil Went Down to Georgia” hit, with noted guitar shredder Dave Martone. The animated video is great fun.

7. “Life is just a fantasy, can you live this fantasy life?” Hey, it’s Aldo Nova, who’s back with new music in the form of “When All is Said and Done,” among 22 new songs from the forthcoming album, “The Life and Times of Eddie Gage.” As the title suggests, it’s a rock opera from the Montreal-based rocker, with songs about a songwriter and his legal dispute involving a “lifetime contract with Trait Records.” Check out the video below.

8. Founding KISS guitarist Ace Frehley has released his second collection of 11 rock ‘n’ roll covers called “Origins Vol. 2,” via Entertainment One (eOne). The album features guitar-heavy collaborations with Cheap Trick’s Robin Zander, Lita Ford and fellow former KISS-er Bruce Kullick, on songs made famous by Led Zeppelin (“Good Times, Bad Times”), The Stones (“Jumpin’ Jack Flash”), Jimi Hendrix (“Manic Depression”) and others. “I just thought about the songs that I used to play in clubs when I was doing other people’s material,” Frehley said in a news release. “I went through my album collection and thought about the songs that influenced me the most. It was fun picking out the songs. It’s a pretty well-rounded record and I think the fans will enjoy it.” Song samples are posted here.

9. Stevie Nicks will hit the big screen in “24 Karat Gold The Concert,” filmed by Joe Thomas during Nicks’ 67-city tour of the same name. All the hits from her solo career and Fleetwood Mac days are featured, of course, including “Rhiannon,” “Stop Draggin’ My Heart Around,” “Edge of Seventeen,” “Stand Back,” “Landslide,” and others. Movie tickets are sold on the website StevieNicksFilm.com, and a teaser “Gypsy” video was posted to YouTube on the first day of fall.

10. Finally this month, the Canadian Songwriters Hall of Fame (cshf.ca) has inducted two songs written by synth-pop band Men Without Hats. “Their smash hits ‘Safety Dance’ and ‘Pop Goes the World’ catapulted the new wave band from Montreal to international fame in the 1980s, garnering commercial success and countless awards,” says a news release. The hall will add both records, both written by lead vocalist Ivan Doroschuk, to its permanent and interactive exhibition at the National Music Centre in Calgary, which features “a celebrated catalogue of inducted songs that fans can listen to, as well as displays, exclusive artifacts, and one-of-a-kind memorabilia celebrating Canada’s greatest songwriters and Inductees.” A virtual induction presentation is planned for a later date. Last April, “Tonight Show” host Jimmy Fallon performed “Safety Dance” with health care workers and The Roots with the added lyric, “Everybody’s washing their hands,” as part of the One World: Together At Home benefit concert for COVID-19 relief.

Check back here at Rock.It Boy Entertainment for Tom’s next Top 10.