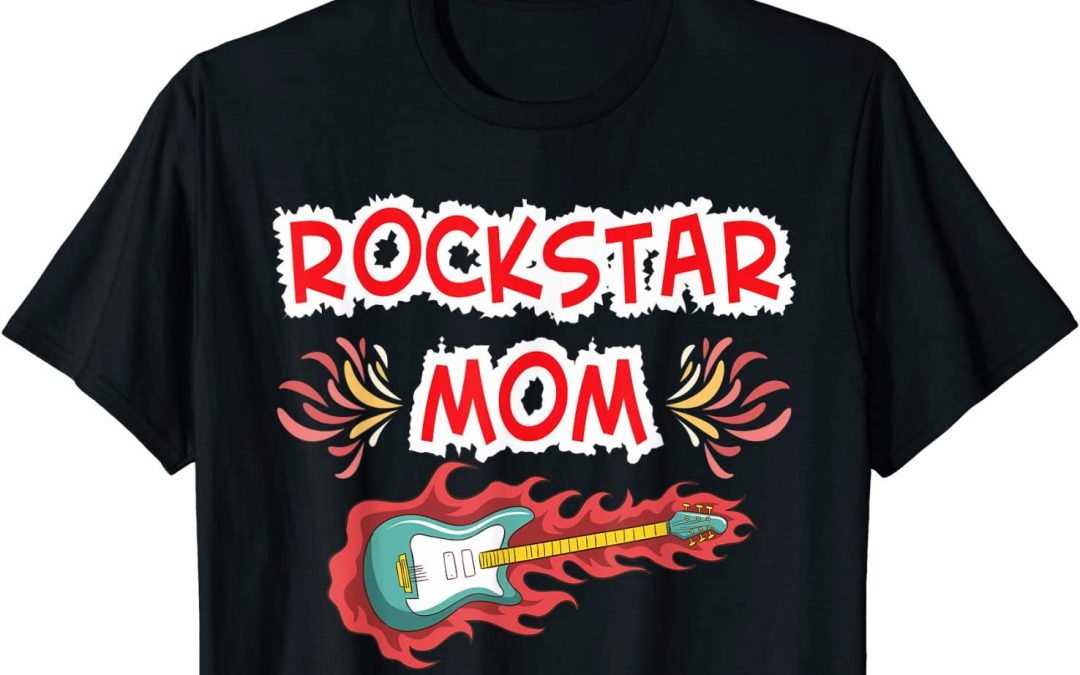 Photo Credit:Rockstar moms are the best, as noted on this T-shirt found on amazon.com

Songs about mothers are plentiful, as they should be. Loving mothers make the world go ‘round, after all, so in honour of Mother’s Day I’ve compiled a list of special songs about those who give birth, but be warned: They’re not all warm and fuzzy here.First stop, my Apple Music library. I weeded out such titles as “Go Motherfucker Go” (Nashville Pussy) and “Motherfucker of the Year”(Motley Crue), album names (Mother’s Milk, by Red Hot Chili Peppers) and also band names (Mother Mother, I Mother Earth) to come up with my greatest-hits list of songs with “Mother,” “Mom” or “Mama” in the title, with additional inspiration from a post on spinditty.com.

Turns out there are many rock/pop songs with simply “Mother” as the title, but that’s another story.

In the running for worst song ever recorded by the reggae-rock trio, this track is so deliciously offbeat that it cracks my Top 10 of “Mother” songs. “The telephone is ringing, is that my mother on the phone,” guitarist Andy Summers shrieks, in a rare lead vocal from him.The tense, Middle Eastern-sounding song sure was in stark contrast to Sting’s much more refined pop songs on the Synchronicity album.“Ladies and Gentlemen, I present to you the most skipped-over track of any Police album,” says one YouTube commenter, and he’s not wrong.

Rhythmically frenetic, this song was among my favourites on 1984’s Songs From the Big Chair, and was released months ahead of the album to showcase the duo’s edgier sound.
Co-songwriter/singer Roland Orzabal once described “Mother’s Talk” as an unsuccessful attempt to mimic the sound of Talking Heads. “The song stems from two ideas,” he has said. “One is something that mothers say to their children about pulling faces. They say the child will stay like that when the wind changes. The other idea is inspired by the anti-nuclear cartoon book When The Wind Blows by Raymond Briggs.”

“Welfare mothers make better lovers,” Neil Young sings on this rager from the Rust Never Sleeps album of 1979. “Dee-vor-ceeeeeee!” the band sings in harmony, in the chorus.
The lyrics are delivered tongue-in-cheek, of course, as Young sets the stage for the Grunge explosion of a decade-plus later. “That’s Donald Trump’s new campaign song, ‘Welfare Mothers,’ Young once quipped during a 2016 concert.“You heard it here first, folks.”

Recorded at Mushroom Studios in Vancouver, this upbeat gem was a 1977 hit for Doucette from his debut album of the same name. Looking back, there are some echoes of Steve Miller on this cut, which urges mothers everywhere to allow their boys to rock and roll. RIP to the Montreal-born Doucette, a Ladner resident who died of cancer last month at age 70, while in hospice care.

About valium use to combat anxiety, this jangly song was among the very first to tackle the middle-class issue of drug dependency, and was a minor hit for the Stones in 1966. The song has an Indian feel, with its Eastern-flavoured guitar riff. During a recording session, an engineer requested that his wife get some drugs, something relatively mild, not too hard, and Mick Jagger was inspired to compose the lyrics about the little yellow pills, starting with the memorable line, “What a drag it is getting old.”

Fast and funky, with a beat and structure similar to Brown’s earlier “Cold Sweat” song, “Mother Popcorn” was a sign in 1969 that the singer was more concerned about rhythms than lyrics. It was the highest-charting of a series of songs inspired by the popular dance the Popcorn that Brown had recorded that year, and the “mother” in the title, according to one biographer, is “honorific for a big butt.”

Probably the most riff-rocking, power-pop track in the Swedish band’s catalogue, “Does Your Mother Know” is propelled by Björn Ulvaeus’s rare turn on lead vocals, along with the sunshine harmonies of the band’s two females, in a song about resisting the advances of an
underaged girl. What a timeless blast of post-disco pop perfection from 1979.

Among the songwriter’s first post-Beatles singles, “Mother” considers his relationship with both his father, who’d abandoned the family, and mother, who died in a car crash 12 years before this song was released, in 1970. The shorter single edit, heard below,
omits the funeral bells of the album version. Either way, it’s a heartbreaking memo to Lennon’s parents. “Mama don’t go, daddy come home,” Lennon wails at the song’s end.

A contemplative, and compositionally complicated, acoustic ballad from The Wall album, Pink Floyd’s “Mother” is the near the top of my “Mother” songs list because it’s just a damn good song. The singer feels alienated from his overprotective mother, who wants to build a wall around her son as he grows up and yearns to explore the world. Of note, the time-signature changes in the song proved too much for drummer Nick Mason to learn, so Toto’s Jeff Porcaro was brought in during the recording session.

Blessed with an irresistible reggae beat and Simon’s clear, high voice, this song was recorded in 1971 in Jamaica with Jimmy Cliff’s backing band and Cissy Houston (Whitney’s mom) on background vocals.The title was inspired by a chicken-and-egg dish called “Mother and Child Reunion” that Simon saw on a Chinese restaurant’s menu. “The song’s lyrics were inspired by a pet dog that was run over and killed,” according to a post on Wikipedia. “It was the first death Simon personally experienced, and he began to wonder how he would react if the same happened to his wife, Peggy Harper. ‘Somehow there was a connection between this death and Peggy and it was like Heaven, I don’t know what the connection was,’ Simon told Rolling Stone in 1972.”