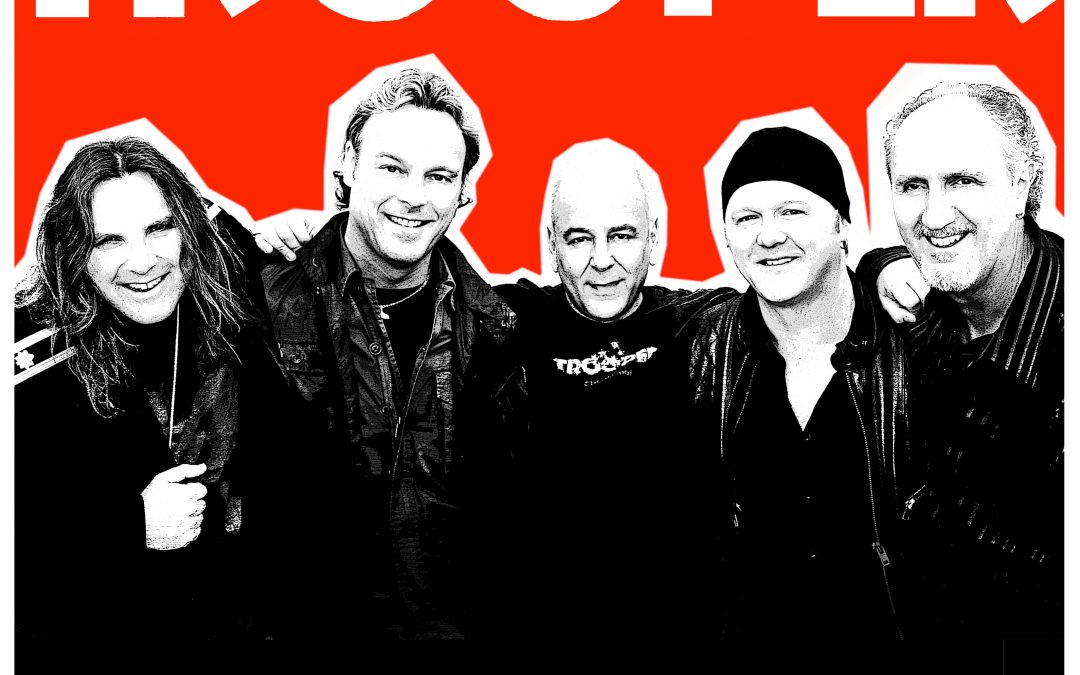 Siren D
Rock.It Boy Entertainment presents TROOPER at the Star of the Sea Hall on August 1st to kick off the annual SEA FESTIVAL in White Rock. So, let’s brush up on our TROOPER facts!  Here’s a list of 10 things you may or may not already know about the boys that will be Raising a little hell here in our seaside community this August long weekend. Do you have some cool stories, facts or experiences with TROOPER?? Share with us below or on our Facebook page!

Originally starting with the name ‘Winter’s Green’, members Ra McGuire and Brian Smith formed the band in 1967. Down the road, in the early seventies, they changed their name to ‘Applejack’ and added drummer Tommy Stewart and bassist Harry Kalensky to their lineup.

After seeing Applejack perform,  Randy Bachman of Bachman-Turner Overdrive and The Guess Who, signed the band to his record label ‘Legend’.  The band, which was now known as Trooper, went on to record their self-titled debut album produced by Bachman’s label.  After leaving Legend and signing with MCA Records, Frank Ludwig  joined McGuire, Smith, Kalenski and Stewart in 1975 as the keyboardist. In 1977 they received Juno Award nominations for Most Promising Group of the Year as well as Composer of the Year for the song ‘Two For the Show’  from an album of the same name released in 1976.   Frank also sang two songs off of the ‘Thick as Thieves’ album, released in 1978.  During his time with Trooper, (unsure of exact date) Frank received a Juno nomination for top Piano Player of the year.

In 2012, Trooper helped out to rescue a cat that was found frozen to a driveway in Newfoundland.  His rescuers named him ‘Trooper’ and it’s easy to see why.  The oxford english dictionary defines ‘trooper’ as meaning ” A brave or stalwart person”.  He may not be a person but this little guy is just that……a trooper.  After having his tail and one of his hind legs amputated due to the frostbite injuries he suffered, the band sent a care package including a signed CD and a mini ‘Raise a little Hell’ t-shirt to the foster home of their furry namesake to help in his recovery.  As you can see, the t-shirt fits ‘Trooper’ just right and no doubt the music he listened to while he was on the mend kept his spirits up! Cheers to you, Trooper, and to you as well, Trooper!! Check out more on this story here.  www.torontosun.com/2012/04/02/trooper-the-miracle-cat-gets-love-from-rock-icons

Trooper has had, including the current, 23 different band members over the years, with Ra McGuire (vocals, harmonica) and Brian Smith (guitar) remaining the constant. The band also consists of Gogo on (keyboards) and Scott Brown (bass) who have both been with Trooper for 19 years. Drummer Clayton Hill joined in 2006.

I’ve had the chance to hang out with original drummer Tommy Stewart on a few occasions in the past 5 years, at random gigs and jams here and there.  An interesting bit of info he told me…. On a recording of “Here for a Good Time” the sound in the background that resembles a wood block, is actually Tommy himself clicking his tongue throughout the song. Needless to say, he remembers that his tongue and cheeks were sore for days afterwards.

Trooper’s compilation album named “Hits from 10 Albums” was released on Canada Day in 2010, marking the band’s 35th anniversary. The totally updated and re-mastered collection featured songs from their entire recording career. John Kereiff of Gonzo Magazine called it “THE summer album of 2010.

Trooper has released 11 albums, been awarded 5 gold and 11 platinum plaques comprising millions of sales in Canada. They also received a Juno Award  for ‘Band of the Year’ in 1980. Their 6 X Platinum greatest hits, Hot Shots, continues to be one of Universal Music Canada’s best selling catalog CDs. The official Press Release from Universal named Trooper as “One of Canada’s top five selling bands of all time”.  In 2012 Trooper songwriters Ra McGuire and Brian Smith were awarded SOCAN’s prestigious ‘National Achievement Award’ to acknowledge their significant and lasting contribution to Canada’s songwriting legacy.

Lead vocalist Ra McGuire was born in 1950 in Vancouver, British Columbia and began singing at the age of 12.  Ra humbly states on his website www.ramcguire.com/biography/   “I’ve written or co-written well over 200 songs – 100 of which have been recorded and released, a dozen of which have topped the charts. I’ve received multiple awards for most of those hits and – possibly my favourite among the others – a West Coast Juno for “Best Male Vocalist”.

Trooper performed at the 2010 Olympics Victory Ceremonies in Vancouver, BC on February 21, 2010. Coverage of the event was broadcast in Canada and around the world on networks such as CTV and Much Music. Check out the video on youtube.          https://www.youtube.com/watch?v=sofSLA3ElU4

Are you ready to kick off the 65th Annual White Rock Sea Festival?  Well, we sure are and we couldn’t be more excited and honoured to have the amazing TROOPER performing Live with ME and MAE and TOMMY ALTO! The venue is the Star of the Sea Hall at 15262 Pacific Avenue in White Rock.  Please note that this show is 19 +.  Tickets available at Tapestry Music, online at Ticketweb.ca or by phone at  1-888-222-6608

See you at the Show!!
Check out the event ‘Trooper in White Rock!’  on Facebook! https://www.facebook.com/events/303179426505731/
Information in this blog was obtained partly from Trooper’s Official website and other websites. To find out more history of the band, it’s members, upcoming shows and the music we love,  please visit Trooper’s official website at www.trooper.com
their Twitter account at  www.twitter.com/trooper
or the official Facebook page for Trooper at  www.facebook.com/trooperband
Visit Me and Mae’s website at  www.meandmae.com.
Visit Tommy Alto’s website at  www.westcoastrock.ca/band/tommy-alto.