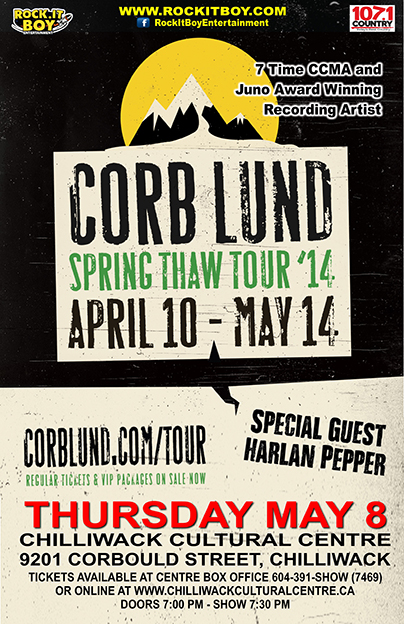 Thursday, May 8 at the Chilliwack Cultural Centre, 9201 Corbould Street, Chilliwack. Tickets are $37.50 (Plus Facility Fee & Service Charges) at the Centre Box Office.
Charge by phone at 604-391-7469 or online at www.chilliwackculturalcentre.ca.

Country 107.1 and Rock.It Boy Entertainment proudly present The Spring Thaw Tour featuring CORB LUND with guests HARLAN PEPPER on Thursday May 8 at the Chilliwack Cultural Centre, 9201 Corbould Street, Chilliwack. Tickets are $37.50 (Plus Facility Fee & Service Charges at the Centre Box Office. Charge by phone at 604-391-7469 or online at www.chilliwackculturalcentre.ca.

The Juno-winning songcraft of honky-tonker CORB LUND runs from Goth girls to survivalists, bovines to bibles and antique pistols to vintage motorcycles; exactly what you would expect form a native son of Alberta. From rockabilly to western swing, cowboy balladry to country-rock with an occasional yodel thrown in, Corb and his three piece HURTIN’ ALBERTANS are doing it all Country style. Their incredible diversity is heard in such songs as “Truck Got Stuck”, “Roughest Neck Around”, “Hair in My Eyes Like A Highland Steer”, “Devil’s Best Dress”, “(Gonna) Shine Up My Boots”, “I Wanna Be In The Cavalry”, “Time To Switch To Whiskey”, “Truth Comes Out”, “Counterfeiter’s Blues” and “A Game in Town Like This”.

Their latest album Cabin Fever, screamed to Canada’s number one album in its first week. The album also made the Polaris Prize long-list in addition to receiving rave reviews across the globe from the likes of NPR, Uncut (9 out of 10) and the New York Times who described it as “an album of pithy mischief and roguish charm.” From the regretful ballad “The One I Left in the Chamber”, the twangy paean to survival “(You Ain’t a Cowboy) If You Don’t Get Bucked Off”, the yearning “September”, the raucous “Drink It Like You Mean It” and the apocalyptic “Gettin’ Down on the Mountain” to the blues-rockin’ “Dig Gravedigger Dig”, the wily road tale “Bible on the Dash” and the Betty Page-inspired “The Gothest Girl I Can” and more Cabin Fever delivers a dozen ass-kicking songs.

Tracy Feist, AmericanCowboy.com says, “Another proud son of southern Alberta ranching stock, Lund carries on the troubadour tradition of Ian Tyson. His songs tell vivid stories – like ‘This is My Prairie” and the Marty Robbins-infused “Devil’s Best Dress.’ And Lund can yodel, too. What more can you ask for?” CMT.com states, “…Corb Lund is an authentic cowboy singer.” All Music Guide concludes, “He’s like a cross between Ian Tyson and Ryan Adams, like Michael Martin Murphey fronting Jason & The Scorchers, like the bastard grandson of Marty Robbins and Wanda Jackson…” Washington Post exclaimed: “Lund is a revelation, laconic and scary smart, with a devil’s eye for details.”

With one foot in old-fashioned cowboy music, but treating it with some abandon and irreverence and with seven records’ worth of material to choose from, every show is unique. This is your opportunity to see the hottest ticket in country music. Get your tickets now.

HARLAN PEPPER is four young men from Hamilton playing music with an old soul, conjuring memories of that bygone era of AM car radios and the dusty aisles of small town vinyl record bins. Their debut album Young And Old rolls along with the top down playing like a basement session with Buck Owens and Hank Williams getting down with Joel Plaskett and Jeff Tweedy. From the wind-in-your-hair banjo-led “Great Lakes” thru the road-ready “Little Miss Sunshine”, to the sing-along crowd favourite of “Reefer”, you will forget how odd it is to see such young musicians successfully channel 60s and 70s folk rock sounds.

An accomplished live band, HARLAN PEPPER has shared the stage with the Sadies, Born Ruffians, Elliot Brood, Lee Harvey Osmond, Huron, the Arkells, and Feist. View Magazine observes, “The enunciation in vocals, the cadence of phrasing – both songs and performance – while simple in structure, betray some serious crafting in lyric and arrangement.” Bob Segarini (FYI Music Weekly) states, “These young men write and play like old souls. There are roots in traditional country, the Grateful Dead, and the great folk rock and alt-country bands of the past like the Flying Burrito Brothers, the Band, and Buffalo Springfield.”