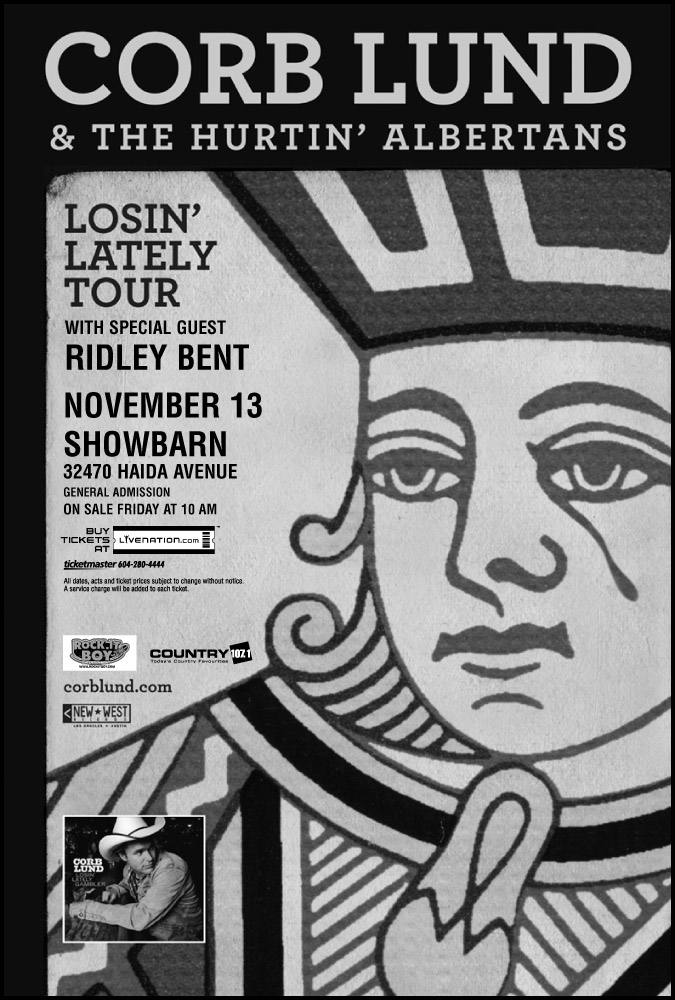 CORD LUND AND THE HURTIN’ ALBERTANS WITH RIDLEY BENT

Lund has already impressed listeners and critics: he has been named Roots Artist of the Year by the Canadian Country Music Association for the last five years running and was again nominated this year. He collected the Roots and Traditional Album of the Year trophy for his album  Hair in My Eyes Like a Highland Steer at the 2006 JUNO Awards (the Canadian Grammys), and took home a CCMA Album of the Year award for the set as well. His ambitious 2007 song cycle Horse Soldier, Horse Soldier! was nominated for the prestigious critical accolade, the Polaris Music Prize.

Country and Western music has always run in Lund’s blood, but before he began performing it full-time, he was swept away by indie rock. From 1989 to 2001, he worked with the aggressive Edmonton band the Smalls. “They call it punk rock – they say that because it was an indie kind of project – but it was more like a modern kind of Black Sabbath thing,” Lund says. “It was a very do-it-yourself, independent-scene kind of thing. So it was kind of punky. We did four records. It was good – we sold about 40,000 records. I think if the band had been from Chicago or New York or Los Angeles, we might have been able to take it further, but it was a niche music, and we took it about as far as we could take it in Western Canada.”

Lund and his group (Lund is backed on the collection by his longtime band the Hurtin’ Albertans – bassist Kurt Ciesla, drummer Brady Valgardson, and guitarist-banjoist Grant Siemens), who will support Losin’ Lately Gambler with extensive touring, have already made their mark as a top concert act. The Hurtin’ Albertans routinely sell out arenas, and they’ve enlisted a legion of fans in the U.S. from Montana to Texas with appearances with alt-country stars like Robert Earl Keen and Hayes Carll.

Their audiences are not restricted to country enthusiasts, however: Lund has appeared on eclectic bills at high-profile events like England’s Glastonbury Festival (alongside the Who and the Alarm), Canada’s Virgin Festival (with Stone Temple Pilots), and Australia’s Byron Bay Blues Festival (co-billed with Buddy Guy and David Gray). He appeared at New West’s 2009 showcase at Austin’s South By Southwest Music Festival.

“We play folk fests and rock fests and country fests.” Lund says. “I write my own stuff, and a lot of the regular country guys don’t. I think there’s a kind of quirkiness to the writing that opens it up a little bit to people who might not normally pick up on country & Western stuff. I’m in a unique situation: I grew up country, and I spent 10 years in a rock band, in a situation where you were encouraged to be unique and strive for new sounds. I bring that kind of thing back to my country writing. There’s enough of an irreverence to it where it steps outside the boundaries of what’s traditionally expected.”