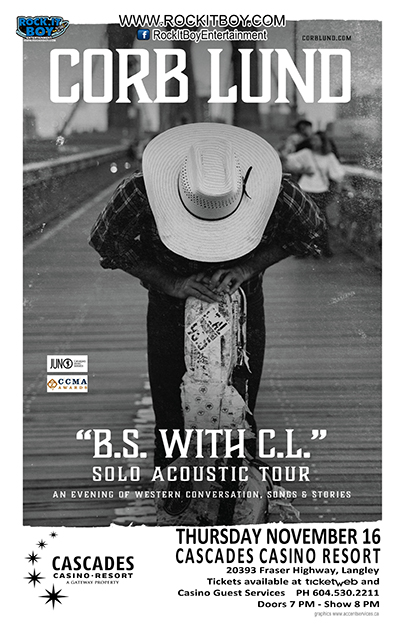 The Best Game in Town

Thursday, November 16 at the Cascades Casino Resort Summit Theatre in Langley
Tickets are $42.50 (plus Facility Fee and Service Charges)
At Casino Guest Services (604-530-2211) and www.ticketweb.ca.

CORB LUND need no introduction to Country Music fans, rednecks or prairie folk. He has established a solid fan base on the strength of such notable songs as “The Truck Got Stuck”, “Roughest Neck Around”, “I Wanna Be in the Cavalry”, “Long Gone to Saskatchewan”, “Rye Whiskey/Time to Switch to Whiskey”, “Hurtin’ Albertan”, “Family Reunion”, “The Oil’s Back in Town” and “Hair in My Eyes Like a Highland Steer”.

Lund’s latest album, Things That Can’t Be Undone, recorded with his long time band The Hurtin’ Albertans, is a self-assured and mature set of songs that pairs Lund’s characteristically sharp songcraft with a bevy of new sounds, thrusting his mix of earnest Americana, rollicking honkytonk and rousing alt-country to new heights.

The end result is a lively and loose record influenced heavily by ‘60s and ‘70s rock and country and steeped in the kind of narratives Lund is beloved for. The cautionary tale “Talk Too Much” swaggers like a Stones song. On “Washed-Up Rock Star Factory Blues” Lund offers an uproarious response to Johnny Paycheck’s classic “Take This Job and Shove It”. In the powerful “Sadr City” an Eastern influenced psychedelic guitar riff sets the scene for a tragic tale about the Siege of Sadr City, continuing Lund’s tradition of military songs that he began in 2007 with “Horse Soldier! Horse Soldier!”.

Loss is a prevalent theme on the record and takes several different forms throughout. On the poignant album closer “Sunbeam” Lund laments the death of his young niece. On the bristling “Alt Berlin Blues” he grapples with the impermanence of places he loves. On the potent cowboy folk song, “S Lazy H,” Lund, a 6th generation rancher, details how life on the ranch has changed due to expansion and greed.

Lund’s previous studio album, Cabin Fever (2012), hit #1 in Canada its first week, was certified gold, made the Polaris Music Prize longlist and earned him a Juno Award Nomination for Roots & Traditional Album of the Year: Solo (2013). Avowed fan Miranda Lambert invited Lund to open several stadium shows for her and Dierks Bentley. The Washington Post, exclaimed, “Lund is a revelation, laconic and scary smart, with a devil’s eye for details.”

Don’t miss this opportunity to spend an evening up close and personal with CORB LUND; just a cowboy and his guitar pickin’ and singin’ the songs that bring country life to life.