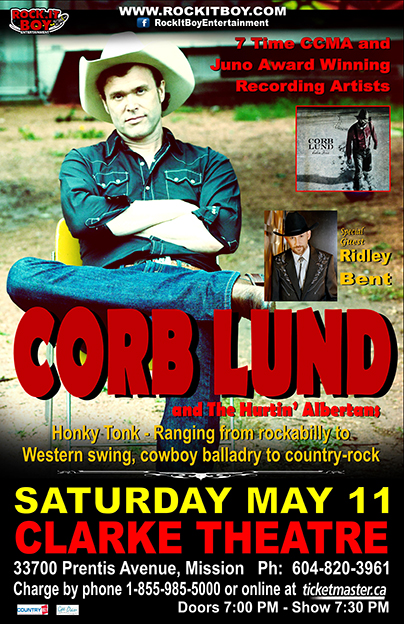 CORB LUND AND THE HURTIN’ ALBERTANS

Country 107.1 & Rock.It Boy Entertainment are proud to announce that CORB LUND and THE HURTIN’ ALBERTANS will be joined by RIDLEY BENT on Saturday, May 11 at the Clarke Theatre 33700 Prentis Avenue, Mission. Tickets are $34.50 (Plus Facility Fee & Service Charges) available at all Ticketmaster locations. Charge by phone 1-885-985-5000 or online at www.ticketmaster.ca.

The songcraft of honky-tonker CORB LUND runs from goth girls to survivalists, bovines to bibles and antique pistols to vintage motorcycles; exactly what you would expect form a native son of Alberta. From rockabilly to western swing, cowboy balladry to country-rock with an occasional yodel thrown in, Corb and his three piece HURTIN” ALBERTANS are doing it all Country style. Their incredible diversity is heard in such songs as “Truck Got Stuck”, “Roughest Neck Around”, “Hair in My Eyes Like A Highland Steer”, “Devil’s Best Dress”, “(Gonna) Shine Up My Boots”, “I Wanna Be In The Cavalry”, “Time To Switch To Whiskey”, “Truth Comes Out”, “Counterfeiter’s Blues” and “A Game in Town Like This”.

It has all led up to their latest album Cabin Fever, currently Canada’s number one album. From a rustic retreat deep in the Rockies, this enthralling new album evolved from a period of introspection and hard traveling. From the regretful ballad “The One I Left in the Chamber”, the twangy paean to survival “(You Ain’t a Cowboy) If You Don’t Get Bucked Off”, the yearning “September”, the raucous “Drink It Like You Mean It” and the apocalyptic “Gettin’ Down on the Mountain” to the blues-rockin’ “Dig Gravedigger Dig”, the wily road tale “Bible on the Dash” and the Betty Page-inspired “The Gothest Girl I Can” and more CORB LUND and THE HURTIN’ ALBERTANS deliver a dozen ass-kicking songs. A special edition of Cabin Fever will feature an extra disc with an acoustic version of the tracks.

With a list of awards that reads like a novel, they are definitely masters of their craft. The Canadian Country Music Association named Lund Roots Artist of the Year 7 consecutive years (2004 – 2010). They also got the award for Album of the Year (2006) and Independent Group or Duo of the Year (2004, 2005). They were also awarded a Juno for Roots & Traditional Album of the Year (2006) along with about 50 more nominations and wins.
Tracy Feist, AmericanCowboy.com says, “Another proud son of southern Alberta ranching stock, Lund carries on the troubadour tradition of Ian Tyson. His songs tell vivid stories – like ‘This is My Prairie” and the Marty Robbins-infused “Devil’s Best Dress.’ And Lund can yodel, too. What more can you ask for?” CMT.com states, “…Corb Lund is an authentic cowboy singer.” All Music Guide concludes, “He’s like a cross between Ian Tyson and Ryan Adams, like Michael Martin Murphey fronting Jason & The Scorchers, like the bastard grandson of Marty Robbins and Wanda Jackson…”

With one foot in old-fashioned cowboy music, but treating it with some abandon and irreverence and with seven records’ worth of material to choose from, every show is unique. This is your opportunity to see the hottest ticket in country music in an intimate venue. Get your tickets now!

For More information on CORB LUND and THE HURTIN’ ALBERTANS visit www.corblund.com.

Showcasing a keen fascination for characters whose life on the straight and narrow rarely lasts past the nearest exit to a short, crooked road RIDLEY BENT is a magical, musical storyteller. The tales are as tall as they come, and the characters larger than life. There are quieter moments as well, some thoughts on love and loneliness and, of course, the evolving cast of moonshine-running, racecar-driving malcontents tend to know their way around the ladies as well as they do the back roads of the west. Hop on board the tale train with “Suicidewinder”, “Pastures of Heaven”, “Heartland Heartbreak”, “Nine Inch Nails”, “I Can’t Turn My Back On The Bottle” and “Buckles & Boots”. These are stories told the way only Ridley can; songs that run the gamut from hard and bitter to hardly better.

A CCMA nominee (2009) and 7-time BCCMA winner, RIDLEY BENT is describes as “one of Canada’s strongest singer-songwriters, an exceptional lyricist who seems to have an endless cast of oddball characters running around in his head.” (John P. McLaughlin, The Vancouver Province). Greg Quill of The Toronto Star states, “Ridley Bent is funny, incisive, witty and an exceptionally literate lyricist, and he knows how to rock out”. Lynn Saxberg of The Ottawa Citizen concludes, “A beat-poet cowboy that can sing a broken hearted country song [that  will] make you want to cry”. Channeling the high-energy performance ethic of artists like Dwight Yoakum and Little Feat, Ridley and his band are sure to tear a deep strip off the joint!