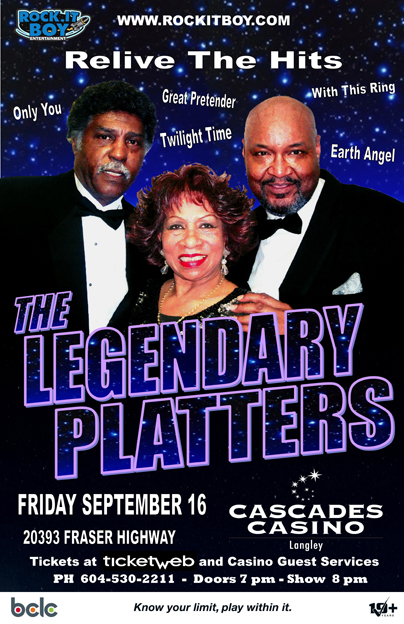 Rock.It Boy Entertainment is proud to present the return of THE LEGENDARY PLATTERS in concert on Friday, September 16th at Cascades Casino Summit Theatre in Langley. Tickets are available for $32.50 (plus Facility Fee and Service Charges) at Ticketweb.ca and from Casino Guest Services. Charge by phone 604-530-2211

THE PLATTERS were one of the top vocal groups of the rocking1950’s, achieving success with a crooning, middle-of-the-road style that put a soulful coat of uptown polish on pop-oriented, harmony-rich material. They were a global sensation, selling fifty-three million records and touring the world as international ambassadors of musical goodwill and appearing in 27 rock and roll-themed movies, including Rock Around the Clock and The Girl Can’t Help It.

They were among the first Doo-Wop groups to be inducted into the Rock And Roll Hall of Fame in 1990. Their distinctive sound was a bridge between the pre-rock Tin Pan Alley tradition and the burgeoning new genre, and they were one of the first ‘black’ groups to be targeted to a predominantly ‘white’ youth audience in the US.

Formed in Los Angeles in 1953, the group was soon taken under the wing of the hustling jack-of-all-trades manager Buck Ram who rearranged the line-up and even wrote some of THE PLATTERS greatest chart topping hits like “Only You” and “The Great Pretender.” What set THE PLATTERS apart from other groups of the era, who often ended up penniless after the stardust settled, was that Ram had the group incorporate. Each member received equal shares of stock, full royalties and their social security was paid thus insuring their future financial security.

In an era where ‘the single’ was the thing – THE LEGENDARY PLATTERS released an amazing total of 38 singles. Expect to hear ‘The Magic Touch,” “My Prayer,” “Smoke Gets In Your Eyes,” “Twilight Time” and many, many more that have become standards and classics, indelibly ingrained in the hearts of a planet.

Slip into something smooth on Friday, September 16th and join THE LEGENDARY PLATTERS, in concert in the Cascades Casino Summit Theatre located at 20393 Fraser Highway in Langley. Tickets are available for $32.50 (plus Facility Fee and Service Charges) at Ticketweb.ca and Casino Guest Services. Charge by phone 604-530-2211. Doors at 7PM. Show at 8PM.