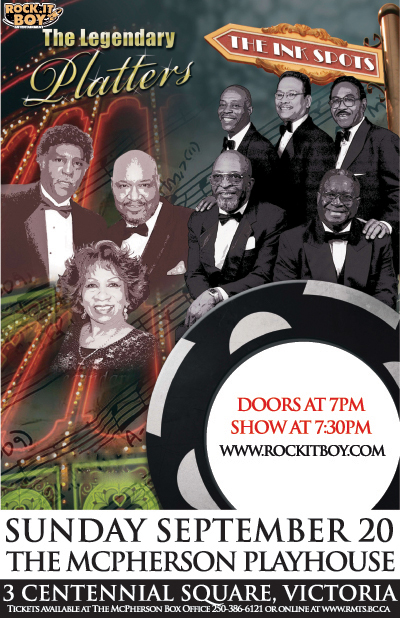 THE LEGENDARY PLATTERS with THE INK SPOTS

Sunday, September 20th at The McPherson Playhouse in Victoria.

Tickets are on sale for $51.50 (Includes Facility Fee and Service Charges) from the McPherson Box Office or online at www.rmts.bc.ca

The twentieth century produced two amazing vocal groups from America, groups that sang with the whole world from the start of Doo-Wop music and all the way to Rock & Roll.

Rock.It Boy Entertainment is pleased to present two timeless classic vocal groups…..                            THE LEGENDARY PLATTERS and THE INK SPOTS, in concert on Sunday, September 20th at The McPherson Playhouse located at #3, Centennial Square in Victoria.  Tickets are on sale for $51.50 (Includes Facility Fee and Service Charges) from the McPherson Box Office (ph 250-386-6121) or online at www.rmts.bc.ca.

THE PLATTERS were one of the top vocal groups of the rocking1950’s, selling fifty-three million records and being among the first Doo-Wop groups to be inducted into the Rock And Roll Hall of Fame in 1990.  Their distinctive sound was a bridge between the pre-rock Tin Pan Alley tradition and the burgeoning new genre, and they were one of the first ‘black’ groups to be targeted to a predominantly ‘white’ youth audience in the US.

They formed in Los Angeles in 1953 and the group was soon taken under the wing of the hustling jack-of-all-trades manager Buck Ram who rearranged the line-up and even wrote some of THE PLATTERS greatest chart topping hits like “Only You” and “The Great Pretender.”  What set The Platters apart from other groups of the era, who often ended up penniless after the stardust settled, was that Ram had the group incorporate. Each member received equal shares of stock, full royalties and their social security was paid thus insuring their future financial security. In an era where ‘the single’ was the thing – THE PLATTERS released an amazing total of 38 singles.  Expect to hear ‘The Magic touch,” “My Prayer,” “Smoke Gets In Your Eyes,” “Twilight Time” and many, many more that have become standards and classics, indelibly ingrained in the hearts of a planet.

THE INK SPOTS’ story spans six decades with more than eighty chart hits and performances throughout the world.  They have been called living legends of American music; one of the most influential vocal groups of all time and “the most imitated entertainers in show business.”

Though there have been many personnel changes through the years, the distinctive harmony sound has always remained intact.  Their story began in Indianapolis, Indiana in when four young men – Deek Watson, Charles Fuqua, Orville “Hoppy” Jones and Jerry Daniels – formed the first version of the group. The first hit “If I Didn’t Care” was a million seller in 1939 and has gone on to sell over nineteen million copies – becoming their all-time biggest hit.

THE INK SPOTS’ songs have been used by all kinds of people, spanning many generations, and can be found on diverse movie soundtracks like Shawshank Redemption and Radio Days (“If I Didn’t Care”) or the BBC TV’s The Singing Detective (“Do I Worry,” “Into Each Life Some Rain Must Fall”).  The music moved with ease into the computer age onto the massively popular computer game Fallout by Bethesda Softworks (“Maybe”) and again in the trailer for Fallout 3 (“I Don’t Want To Set The World On Fire”). THE INK SPOTS helped define the musical genre that led to rhythm & blues, rock and roll, and doo-wop and, as such, were inducted into the Grammy Hall of Fame in 1987 and into the Rock and Roll Hall of Fame in 1989.

Come and hear two of the greatest vocal groups of the twentieth century.  Rock.It Boy Entertainment is proud to present THE  LEGENDARY PLATTERS and THE INK SPOTS in concert on Sunday, September 20th at The McPherson Playhouse located at #3, Centennial Square in Victoria.  Tickets are on sale for $51.50 (Includes Facility Fee and Service Charges) from the McPherson Box Office (ph 250 386 6121) or online at www.rmts.bc.ca.  Doors open at 7:00PM. Show at 7:30PM.