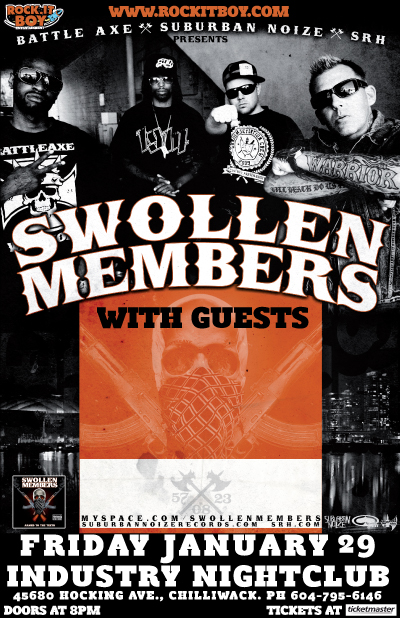 SWOLLEN MEMBERS – ARMED TO THE TEETH

Tickets $20 (plus Service Charges) at all Ticketmaster outlets

Rock.It Boy Entertainment is proud to present the heart of west coast hip-hop, SWOLLEN MEMBERS on their powerful Armed To The Teeth Tour on Friday, January 29th at Industry Nightclub in Chilliwack.  Advance tickets are available for $20 (plus Service Charges) from all Ticketmaster outlets. Personified by the dynamic and intense MC duo Prevail and Madchild, SWOLLEN MEMBERS has returned with the long-awaited sixth studio album Armed To The Teeth (Battleaxe/ Suburban Noize) which was released on October 27th and features guest appearances by Tech N9ne, Everlast and Slaine from La Coka Nostra, Glasses Malone and Talib Kweli.  ‘Bollywood Chick’ (featuring Tech N9ne & Tre Nyce) is the second video and single from Armed To The Teeth and has just been released to radio and television. SWOLLEN MEMBERS, Canada’s undisputed kings of underground hip hop, have enjoyed a successful career, and have worked with some of the most respected MC’s around, but when it came time to record their sixth studio album, they were forced to confront the skeletons that had been hiding in their closet. Madchild was struggling with drug addiction, he was embroiled in legal battles, and his association with outlaw motorcycle clubs provoked the police to swarm his house in full riot gear. Also at this time, Swollen Members’ record label Battleaxe Records had collapsed leaving them homeless. The Armed To The Teeth Tour kicked off in Los Angeles, charged up the west coast via Las Vegas and is currently blowing out the doors across Canada.  They have thrown out the garbage and are back on track.  With five MuchMusic video awards, four Juno Awards for Best Rap Recording of the Year, highly acclaimed tours from Los Angeles to Japan, and the respect of some of the heaviest hitters in the business all under their belt, SWOLLEN MEMBERS returns with a new CD that is their strongest statement to date. Rock.It Boy Entertainment presents SWOLLEN MEMBERS – Armed to The Teeth Tour on Friday, January 29th at Industry Nightclub in Chilliwack at 45680 Hocking Ave. (Phone 604-795-6146).  Advance tickets are $20 (plus Service Charges) from all Ticketmaster outlets (online at www.ticketmaster.ca or Charge-by-Phone at 604-280-4444). Doors open at 8pm.