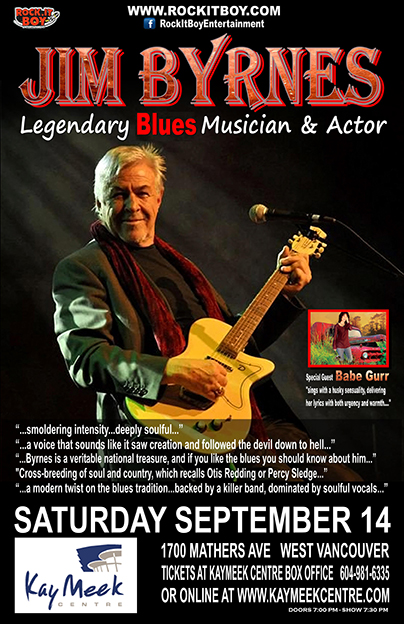 Got the Blues; get Byrnes

Saturday, September 14 at the Kay Meek Centre in West Vancouver.
Tickets are $30.00 (plus Facility Fee and Service Charges) from the Theatre Box Office.
Charge by phone, 604-981-6335 or online at www.kaymeekcentre.com.

There is nothing more powerful than a good song; something no one knows better than legendary blues man JIM BYRNES. With that knowledge he has amassed a stellar collection of good songs including “12 Questions”, “Walk on Boy”, “Still Stuck on You”, “Jailbird Love Song”, “Me and Piney Brown”, “Four Until Late”, “Love is Just a Gamble”, “Of Whom Shall I be Afraid”, “That River”, “Stardust”, “Talk in Circles” and “Just a Pilgrim”, Winner of Canadian Spotlight Awards’ best music video of the year (2006).

From the city streets of his youth along the steaming Mississippi thru the storms of life Byrnes has become a staple of the Vancouver music scene. Still wringing out the notes of his favored 1969 Gibson Hummingbird, Jim expresses “the constant struggle and infinite joy of love”; delivering it all with that quintessential blues vibe. The honors he has received along the way bear testimony to JIM BYRNES’ “good songs”. The albums That River won the Juno for Best Blues/Gospel Album (1996), House of Refuge the Juno for Blues Album of the Year (2007) and Everywhere West the Juno for Blues Album of the Year (2011). Jim further proved he has the pipes winning the Canadian Folk Music Awards Contemporary Singer of the Year (2006, 2009).

British Blues Connection states, “…smoldering intensity…deeply soulful”. “A voice that sounds like it saw creation and followed the devil down to hell” adds Americana UK. “Byrnes is a veritable national treasure, and if you like the blues you should know about him” says Uptown. Vancouver Province calls JIM BYRNES “A cross-breeding of soul and country, which recalls Otis Redding or Percy Sledge”. Naird Newsletter concludes “…a modern twist on the blues tradition…backed by a killer band, dominated by soulful vocals”. Get yourself to this incredible show and you will have to agree!

For More information on JIM BYRNES please visit: www.jamestbyrnes.com.
Joining JIM BYRNES for this appearance is Special Guest BABE GURR. This beauty is much more than just a pretty face. A roots/rock singer-songwriter, she has been turning heads for years with her blend of roots, blues and pop. With her warm, sultry voice, meaningful lyrics and memorable melodies, BABE GURR is a name you won’t forget. Her music has been compared to the likes of Bonnie Raitt, Lucinda Williams, John Hiatt and Sheryl Crow while retaining her own unique sound and style. With a full-on stage presence that has seen her headlining music festivals coast to coast as well as Canada’s most popular and prestigious concert halls this award-winning singer-songwriter is a perfect match to Jim’s deeply soulful sound.

Marke Andrews of The Vancouver Sun states, “Gurr sings with a husky sensuality, delivering her lyrics with both urgency and warmth”. Babe’s songwriting has recently received accolades, taking the win for the Sonic Bids Nashville Song Contest and garnering honourable mention for three self-penned tunes in the acclaimed Billboard World Song Contest “…putting her in the elite group of songwriters internationally” as contest director Mark Furnas said. Her tunes have been licensed for various shows including the U.S. FOX series Higher Ground. In addition Babe appeared on the television show Big Sound, playing an avant-garde lounge singer.