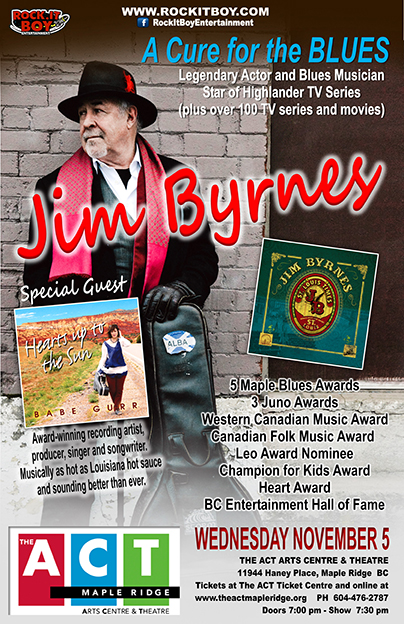 Tickets
$32.50 (plus Facility and Service Charges)

A cure for the Blues

Three-time Juno winner and BC Entertainment Hall of Famer JIM BYRNES was born in blues country. Forty-five years on the blues highway with the likes of Muddy Waters, John Lee Hooker, Taj Mahal and Robert Cray landed this quintessential blues man in Vancouver. Now a west coast legend, Byrnes has crooned, drawled, belted, hollered and sweet talked more songs into a microphone than most people ever get to hear in a single lifetime including “12 Questions”, “Walk on Boy”, “Still Stuck on You”, “Jailbird Love Song”, “Me and Piney Brown”, “Four Until Late”, “Love is Just a Gamble”, “Of Whom Shall I be Afraid”, “That River”, “Stardust”, “Talk in Circles” and “Just a Pilgrim”, Winner of Canadian Spotlight Awards’ best music video of the year (2006).

His current album “St. Louis Times” marks the sixth album that Byrnes has recorded with Steve Dawson as well as the tenth anniversary of their partnership. To mark the occasion, Dawson gathered together some of the best roots musicians in Canada for a super session to record the basic tracks on vintage equipment in a big old studio blessed with brilliant ambience and acoustics. The result is Byrnes’ most personal record to date, with reminiscences of his childhood home expressed through original compositions as well as versions of songs he grew up with that were recorded by St. Louis musicians.

His evocative themes and smoky vocals reveal a truth resulting from a lifetime of experience and struggle. The honours he has received along the way bear testimony to JIM BYRNES’ triumph over adversity. The albums “That River” won the Juno for Best Blues/Gospel Album (1996), “House of Refuge”, Juno for Blues Album of the Year (2007) and “Everywhere West”, Juno for Blues Album of the Year (2011). Jim further proved he has the pipes winning the Canadian Folk Music Awards Contemporary Singer of the Year (2006, 2009). In 1995 he was inducted to the BC Entertainment Hall of Fame.

British Blues Connection states “smouldering intensity [and] deeply soulful”. “A voice that sounds like it saw creation and followed the devil down to hell” adds Americana UK. “Byrnes is a veritable national treasure, and if you like the blues you should know about him,” says Uptown. Vancouver Province calls JIM BYRNES “A cross-breeding of soul and country, which recalls Otis Redding or Percy Sledge”. Allmusic.com declares, “Byrnes is never imitative of any other vocalist. He rides these tunes just right, with a perfect balance of passion and restraint — a winning combination in a bluesman of any era.” Naird Newsletter concludes “…a modern twist on the blues tradition…backed by a killer band, dominated by soulful vocals”. Get yourself to this incredible show and you will have to agree!

With a curious musical mind that makes her a hard one to label, singer-songwriter BABE GURR has been turning heads for years with her blend of roots, blues, world and pop. With intelligent lyrics and memorable melodies superbly delivered in a warm, sultry voice, Babe is the total package. With her polished band Babe brings a crowd-pleasing vibe to every show she performs. It all comes through loud and clear on the tracks “Still”, “Hold On”, “Touched By Angels”, “Crying Over You (with John Mann)”, “I’m Just Here to Dance”, “Voodoo Love” and “Let’s Find a Way”. Her latest treat, “Hearts Up To The Sun” is a five song EP as spicy as Louisiana hot sauce; a full course meal covering the full range of human emotion from antipasto to dessert.

She recently won the Sonic Bids Nashville Song Contest and garnered honorable mention for three self-penned tunes in the acclaimed Billboard World Song Contest, earning her a spot amidst the elite of international songwriters. Most recently, Babe was selected as a finalist for two self-penned tunes in the Great American Song Contest. From headlining music festivals coast to coast, playing some of the most popular and prestigious concert halls in Canada, New York and Seattle, licensing her tunes for the FOX series Higher Ground to appearances on TV’s Big Sound, Canada AM and The Jim Byrnes Show Babe has brought her music to audiences worldwide.

Marke Andrews of The Vancouver Sun states, “Gurr sings with a husky sensuality, delivering her lyrics with both urgency and warmth”. Wildy’s World Review concludes, “Gurr lights up her songs with an engaging presence and a sandy and sultry voice you won’t forget. It’s a stunningly beautiful and poignant musical experience. Babe Gurr is the sort of talent who doesn’t come along that often, and her star is on the rise. It’s only a matter of time before Babe Gurr’s star rises above the Canadian content rule and she becomes a truly International artist”.