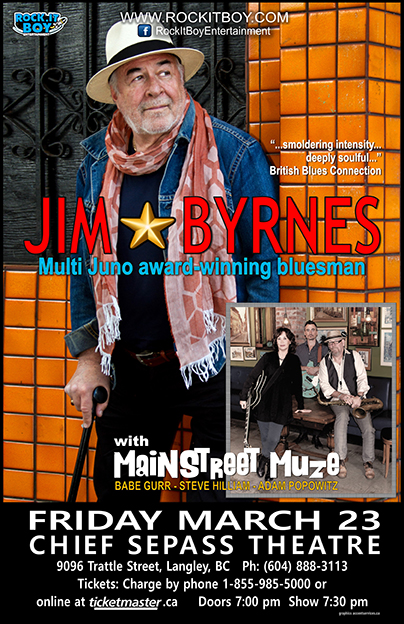 Just plain good for the soul

Rock.It Boy Entertainment presents JIM BYRNES with Special Guest MAINSTREET MUZE on Friday, March 23 at the Chief Sepass Theatre in Fort Langley. Tickets are $45.00 (Plus Facility Fees & Service Charges) available at all Ticketmaster locations. Charge by phone at 1-855-955-5000 or online at www.ticketmaster.ca.

Three-time Juno winner and BC Entertainment Hall of Famer JIM BYRNES was born in blues country. Forty-five years on the blues highway with the likes of Muddy Waters, John Lee Hooker, Taj Mahal and Robert Cray landed this quintessential blues man in Vancouver. Now a west coast legend, Byrnes has amassed a stellar collection of true blue hits including “12 Questions”, “Walk on Boy”, “Still Stuck on You”, “Jailbird Love Song”, “Me and Piney Brown”, “Four Until Late”, “Love is Just a Gamble”, “Of Whom Shall I be Afraid”, “That River”, “Stardust”, “Talk in Circles” and “Just a Pilgrim”, Winner of Canadian Spotlight Awards’ best music video of the year (2006). At age sixty-nine, JIM BYRNES has recorded a career milestone, which, given his history with numerous Juno Awards and Maple Blues Awards, among many other accolades, is saying a lot. “Long Hot Summer Days” is a masterwork from one of Canada’s best-loved musical icons. Records like this don’t come around every day. Listen and be taken away.

His evocative themes and smoky vocals reveal a truth resulting from a lifetime of experience and struggle. The honours he has received along the way bear testimony to Jim Byrnes’ triumph over adversity. The albums “That River” won the Juno for Best Blues/Gospel Album (1996), “House of Refuge”, Juno for Blues Album of the Year (2007) and “Everywhere West”, Juno for Blues Album of the Year (2011). Jim further proved he has the pipes winning the Canadian Folk Music Awards Contemporary Singer of the Year (2006, 2009). In 1995 he was inducted to the BC Entertainment Hall of Fame.

British Blues Connection states “smouldering intensity [and] deeply soulful”. “A voice that sounds like it saw creation and followed the devil down to hell” adds Americana UK. “Byrnes is a veritable national treasure, and if you like the blues you should know about him,” says Uptown. Vancouver Province calls Jim Byrnes “A cross-breeding of soul and country, which recalls Otis Redding or Percy Sledge”. Naird Newsletter concludes “…a modern twist on the blues tradition…backed by a killer band, dominated by soulful vocals”. Get yourself to this incredible show and you will have to agree!

Vancouver based indie group MAINSTREET MUZE, “You’re My Truth”, “Lost Without You”, “Lonely” and “Dark Sided Man”, comprises the core members Babe Gurr, Steve Hilliam and Adam Popowitz. Having each headlined and performed throughout Canada and the U.S. they have combined their considerable talents to create a unique fusion of Roots, Blues and Rock.

Singer-songwriter Babe Gurr has won first place in Nashville’s Sonicbids Songwriting Contest, landed amongst the Top 10 songwriters recognized by BillBoard’s prestigious International Song Contest; ranked in the Top 10 of the Indie International Songwriting Contest (2013) and was selected as a finalist in the “12th and 13th Annual Great American Song Contests. Her intelligent lyrics and memorable melodies are superbly delivered in a warm, sultry voice with a blues rock edge.

Steve Hilliam on sax and keyboards adds a soulful sound to the band. A graduate of the prestigious Humber College Music School, he has been a session and touring player for Gino Vanelli, Otis Rush, Rosemary Clooney and John Faddis as well as a regular member of the Colin James Band for the last 20 years and a special performer with the VSO for the past ten.

On lead guitar and support vocals, Canadian Music Producer (Rear Window Song & Sound Studio) and Recording/Performing Artist Adam Popowitz adds the rock/blues colour to the band’s music. As a member of Pacifika, co-founded with Silvana Kane, Popowitz earned a nomination for World Album of the Year at the Juno Awards (2011) and won Best World Album of 2010 by iTunes for “Supermagique” (2010).