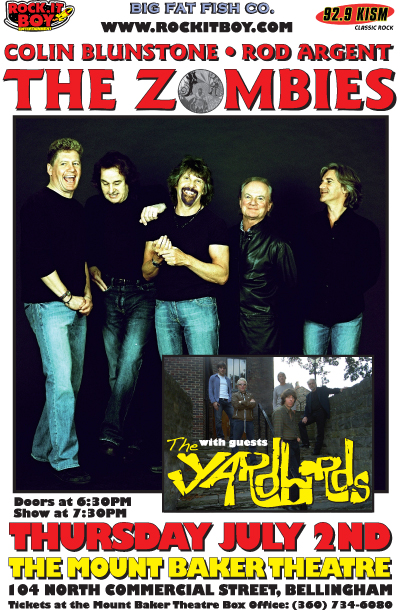 THE ZOMBIES WITH THE YARDBIRDS

2 LEGENDS OF THE SIXTIES IN CONCERT

THE ZOMBIES and THE YARDBIRDS

Two of the most influential British bands that laid the foundations for rock music and songwriting both broke up in 1968 but are finally on the road and together for one night in Bellingham.

Rock.It Boy Entertainment presents THE ZOMBIES and THE YARBIRDS in concert on Thursday, July 2nd at Mount Baker Theatre in Bellingham. Advance tickets are available at the theatre box office  (phone 360 734 6080) for $40.50 and $45.00 plus a special front row ‘Meet & Greet’ package for $70.00).

In 2006 THE ZOMBIES toured for the first time over thirty years and played to rave reviews from the critics in North America.  Led by Rod Argent on piano and Colin Blunstone on vocals, THE ZOMBIES scored major hits in North America in the mid-1960s with “She’s Not There” and “Tell Her No” and did some very successful tours. They were always a favorite of music critics but could not get airplay in their native UK and had an unenthusiastic record company so they disbanded and had moved on to other successful musical careers when “Time of the Season” finally got on radio – and it has never left.

Rod Argent formed a new group ARGENT and scored top twenty hits in both the US and UK with songs like “God Gave Rock ‘n Roll To You,” “It’s Only Money“ and one of rock‘s great anthems “Hold Your Head Up.”   Colin Blunstone’s breathy vocal style was a big factor in THE ZOMBIES success and he had solo hits in the seventies with songs like “Say You Don’t Mind” (written by Denny Lane of Wings fame), “I Don’t Believe in Miracles” and “Caroline Goodbye.”

They never even toured their greatest hit !  “Time of the Season” is a song that epitomizes classic rock, golden oldies and all kinds of clichés.  It is one of the great singles of the late sixties and the album Odessey and Oracle, released in 1968, is now considered one of the best albums of its time and is ranked number eighty in The Rolling Stone magazine’s ‘500 all time best albums.’

THE YARDBIRDS’ career is one of rock music’s legends. It is the band that introduced the three greatest British guitar players to the world: Eric Clapton, Jeff Beck and Jimmy Page.  They recorded classics that just keep on playing; songs like ‘Shapes of Things’, ‘Train Kept A Rolling’, ‘For Your Love’ and Led Zeppelin’s ‘Dazed and Confused.’

They created hard rock out of standard twelve-bar blues, doubling the tempos and whacking the amps up to ten. On the British club scene, THE YARDBIRDS, the Animals, and the Rolling Stones ruled the stages. They expanded the range of the electric guitar, experimenting with feedback, sustain, and fuzztone. THE YARDBIRDS were the bridge between the white R&B of early-sixties London and the fuzz-toned psychedelia and power-chorded heavy metal much later in the decade.  They disbanded in 1968 and went on to other careers, only reforming in the mid nineties after being inducted into the Rock & Roll Hall of Fame in Cleveland, Ohio.

The reformed YARDBIRDS, led by the songwriting team of drummer Jim McCarty and rhythm player Chris Dreja, is in demand everywhere, and they have been blowing minds from Texas to Denmark with the new line-up led which includes John Idan (bass, vocals), the sizzling Ben King on guitar and Billy Boy Miskimmin on the harmonica.  After 35 years without an album THE YARDBIRDS recorded Birdland (2003 Favored Nations Records), with guest appearances by Jeff Beck, Slash (Velvet Revolver, Guns ‘n Roses), Joe Satriani, Steve Vai, Jeff ‘Skunk’ Baxter (Doobie Bros) and Brian May of Queen.  The album has eight remakes of classic YARDBIRDS songs from the sixties and seven new tracks penned by McCarty and Dreja.  They are back.

Rock.It Boy Entertainment presents THE ZOMBIES and THE YARBIRDS in concert on Thursday July 2nd at Mount Baker Theatre located at 104 North Commercial St. in Bellingham. Advance tickets are available at the theatre box office  (phone 360 734 6080) for $40.50 and $45.00 plus special front row ‘Meet & Greet’ packages for $70.00. The door open at 7PM and the show starts at 7:30PM.