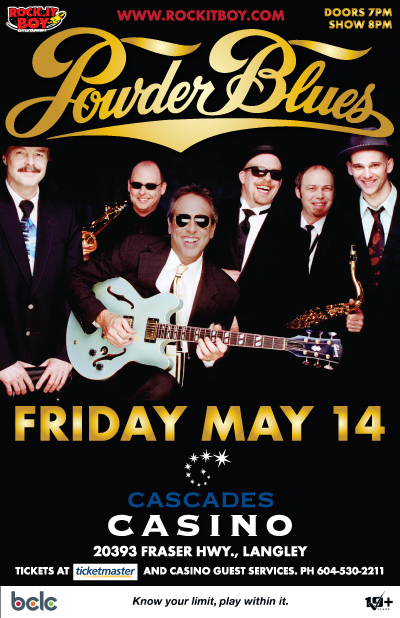 Tickets $37.50 (plus Facility Fee and Service Charges) from Casino Guest Services and all Ticketmaster outlets

Have your tickets ready folks because the blues train is about to pull into your station!

Rock.It Boy Entertainment presents west coast blues legends POWDER BLUES in concert in the lovely Cascades Casino Summit Theatre in Langley on  Friday, May 14th.  Tickets are available for $37.50 (plus Facility Fee and Service Charges) from Casino Guest Services and at all Ticketmaster outlets.

For nearly three decades POWDER BLUES has been Canada’s favourite blues band. Led by guitar player/singer/songwriter and Chicago native Tom Lavin, the band established itself in the late seventies with their self-produced album UNCUT (1979) bucking all the trends of the time and forcing record companies to stand and take notice after they had been shrugged of as ‘un-commercial.’ That album went on to sell over a million copies world-wide.

THE POWDER BLUES BAND became an FM Rock staple in the 80’s, scoring huge hits and winning a Juno Award in 1981.  They have headlined and recorded a live album at the world famous Montreux Jazz Festival in Switzerland, been presented with the W.C. Handy Award in Memphis, Tennessee and even toured the Soviet Union before the Iron Curtain collapsed. They have appeared in concert with such legendary names as Willie Dixon, John Lee Hooker, B.B. King, James Brown, Albert Collins, James Cotton, Stevie Ray Vaughn, the Who, ZZ Top, the Doobie Brothers, Edgar Winter and Tower of Power and are now themselves… a legendary group.

There now a dozen timeless POWDER BLUES albums available, the latest release being blues+jazz=BLAZZ (2004 Blue Wave Records). Expect to hear some great blues classics and original hits like ‘Thirsty Ears,’ ‘Boppin’ the Blues’ and ‘Doin’ It Right(on the wrong side of town)’ from this legendary band which still includes original members Willie MacCalder on keyboards, Bill Runge on bass, Jerry Cook on tenor sax, Bill Clark on trumpet and hit man Daryl Bennett on drums.

For your thirsty ears!  Rock.It Boy Entertainment presents POWDER BLUES in concert on  Friday, May 14th in the glittering Cascades Casino Summit Theatre located at 20393 Fraser Highway in Langley (phone 604 530 2211).  Tickets are available for $37.50 (plus Facility Fee and Service Charges) from Casino Guest Services and at all Ticketmaster outlets (online at www.ticketmaster.ca or charge–by-phone at 604-280-4444).  Doors open at 7PM.  Show at 8PM.