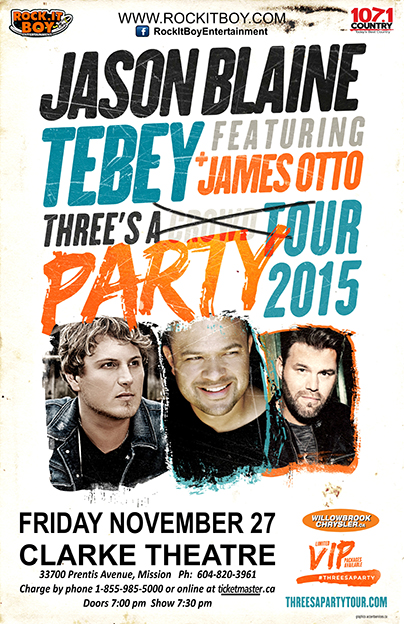 Tickets
$32.50 (plus Facility and Service Charges)

Friday, November 27 at the Clarke Theatre in Mission. Tickets are $32.50
(Plus Facility Fee & Service Charges) available at all Ticketmaster locations.
Charge by phone at 1-885-985-5000 or online at www.ticketmaster.ca.

Fun, family, friends and faith are the cornerstones of life for JASON BLAINE. This Top 5 Canadian Radio and CMT Canada artist grabbed a guitar at 8 and started writing songs at 16, but it was entering his 30’s that brought balance to his life. With five albums under his belt, Jason has definitely found solid footing. His debut album included the Top 25 singles “Heartache Like Mine”, “While We Were Waiting” and “What I Can’t Forget.” The follow-up, Make My Move, hit the Top 5 on the Canadian Country Album Chart producing the Top 10 single “Rock In My Boot” and Top 5 single “Flirtin’ With Me”. Don’t forget “Cool”, “On a Night Like This”, “Rock It Country Girl!” and “They Don’t Make Em’ Like That Anymore”.

A goal-driven songwriter, Jason says, “Song writing used to be easy until I got better at it. You learn how good something needs to be and the attention to detail. His latest effort reflects that realization with a revelation of all sides this dynamic performer’s personality. His work ethic, dedication to fans and family delivered with a healthy dose of fun have earned Jason three CCMA Awards Nominations for Songwriter of the Year (2015, with co-writer Deric Ruttan), Producer of the Year (2015, with Deric Ruttan) and Video of the Year (2015).

Every track on the debut album for TEBEY proves his songwriting chops are just as highly developed as his talents as a performer. The Wait was a resounding success with “Resurrected Heart”, lead single “All About Us”, the radio-burning “Somewhere In The Country”, “Love’s Got A hold On You”, “Freedom” and “Good Time Comin’ On” in addition to the singles “When The Buzz Wears Off”, “Wake Me Up”, “Let It Down” and “Til It’s Gone” which spent an incredible three weeks in the Top 10.

This fine storyteller has shared his with superstars Big and Rich, pop star Shawn Desman, and phenom One Direction. He focuses on how the sentiments expressed resonate with listeners and how easily they can find their own lives, loves and struggles reflected in the story. This ethos saw him win the Canadian Open Country Singing Contest as a teenager, landing a publishing deal with Warner/Chappell Music, a record deal with RCA Nashville and the high-powered management of Bruce Allen. His 2002 single, “We Shook Hands (Man to Man)” broke the Top 40 US Billboard Country Singles Chart and peaked at #3 in Canada, earning him a Canadian Radio Music Award nomination for Best New Male Country Artist, a CMT Special documenting his development as an artist and a segment on CBC Radio’s “Sounds Like Canada”.

JAMES OTTO is 100% country with a heart full of soul. The old-school R&B grit in his powerhouse voice generates a sound somewhere between Nashville and Memphis. His smash hit “Just Got Started Loving You” was declared the No. 1 Country Single of 2008 by Billboard. Its sequel, “Sun Comes ‘Round Again” is for all y’all who wanted the loving to go on all night long. Not to be overlooked are barnburners like “Are Ya With Me” and “Shake What God Gave Ya” plus “Groovy Little Summer Song”, “Ain’t Gonna Stop”, “Sunset Man” and the Ronnie Milsap duet “Good Things Gone Bad”.

Otto was one of the cofounders of Nashville’s genre-bending Muzik Mafia, whose weekly club shows were the springboard to stardom for pals like Big & Rich and Gretchen Wilson. Additionally, the track “In Color”, co-written with and for friend Jamey Johnson, earned them Song of the Year at both the CMA (2009) and ACM Awards (2008), as well as a Grammy nomination for Best Country Song (2009). The THREE’S A PARTY TOUR isn’t his first rodeo either. JAMES OTTO cut his teeth with a 2010 triple-header tour with Toby Keith and Trace Adkins.