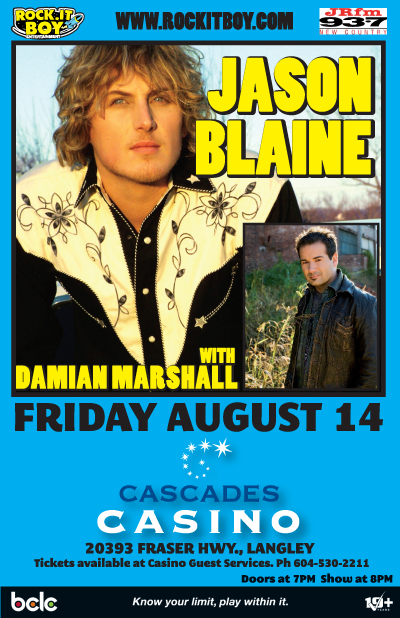 Tickets $29.50 (plus GST and Service Charges) from Casino Guest Services

JRFM 93.7 and Rock.It Boy Entertainment  present JASON BLAINE in concert with special guest DAMIAN MARSHALL on Friday, August 14th in the Cascades Casino Summit Theatre in Langley.  Tickets are on sale for $29.50 (plus GST and Service Charges) at Casino Guest Services

Only two albums into his career and JASON BLAINE is already a solid presence on the country music scene, having had eight singles riding high on the Canadian country charts plus two back-to-back #1 videos on Country Music Television (CMT) Canada. It’s simple: he sings good, he writes great music and he talks about life and growing up in a way that many people understand. After his successful 2005 debut album  While We Were Waiting, which produced four charting singles, Jason moved to Nashville to record Make My Move and it seems to have worked out pretty well for him. The latest song “Give It To Me“” is the fifth single from the album Make My Move which also included “Rock in My Boot,” “Make My Move, Flirtin’ With Me,” “My First Car” and “Good Day to Get Gone.”

Ever since DAMIAN MARSHALL released the single ‘Fortunate One” in 2001, he always seems to have another song on the radio.  He is a young and talented performer but he is no flash in the pan.  He is here to stay and his third and latest album Built to Last (2005 Busy Music), recorded in Nashville with JR Vautour, proved it with the two kick-off singles “Where I’m Running From” and “That’s What Love Is”.  The title track “Built to Last” actually climbed JRFM charts twice – the song is so frisky it had to come back for a second shot.  So far, with “Why Don’t We,” “Not Even a Little,” “I Know What Love Is,” and the latest “Inside Out” DAMIAN MARSHALL has released a remarkable total of seven singles from Built to Last. He has just signed a three album deal with Busy Music and is already performing songs from the upcoming album.

JRFM 93.7 and Rock.It Boy Entertainment present JASON BLAINE in concert with special guest DAMIAN MARSHALL on Friday, August 14th in the Cascades Casino Summit Theatre located at 20393 Fraser Highway in Langley (604 530 2211).  Tickets are on sale for $29.50 (plus GST and Service charges and a whole heap of good times) at Casino Guest Services.   Doors open at 7PM.  Show at 8PM.