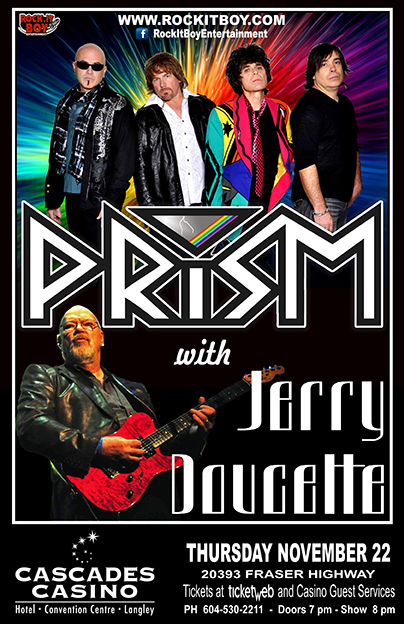 On Sunday, March 6, 2011 the crew of STS-133 Discovery were awakened by the soaring lyrics of “Spaceship Superstar” to begin the last day of that shuttle’s final mission. Such is the legacy of iconic rock group PRISM. An eclectic collection of amazing talent and musical styles, PRISM is the Canadian super-group. Rooted in and influenced by blues, rock and jazz, this spectacular band has a never-ending string of chart-topping hits including the unmistakable anthems “Spaceship Superstar”, “Take Me to The Kaptin” and “It’s Over” along with “Take Me Away”, “Flying”, “You’re Like The Wind”, “Armageddon”, “Virginia”, “Night to Remember”, “Young and Restless” and “Don’t Let Him Know”. With 13 albums under their belt and thousands of concerts these journeymen of rock have proven their mettle earning millions of fans along the way. They have also amassed quite the mountain of industry recognition including the Juno for Group of the Year (1981), SOCAN Song of the Year (1980) for “Night to Remember”, a Juno nomination for Song of the Year (1981) for “Young and Restless” as well as well as the Juno for Producer of the year (1981) for “Armageddon”.

Always the high harmony voice of the band, Vancouver’s own Al “Harlow” Hawirko, the longest-standing member of the band, has slid seamlessly into the role of lead vocals and guitar. He is joined by fellow Vancouverite Tad Goddard, who wrote and performed the hit “Flowers in the Concrete” for Annette Ducharme in addition to ten film scores. Tad’s locked-in bass stylings and strong vocals are integral to the crew’s continuing success. With a lifetime spent perfecting his craft, including six years with Doug & The Slugs, Marc Gladstone, winner of Vancouver’s Spotlight Competition Best Keyboard Performance (1988), adroitly rocks the keyboard while adding to the rich vocals. Rounding out the band is drummer Gary Grace, winner of the Canadian National Championship for Roland V-Drums (2009) and drummer extraordinaire, whose on-fire style is not to be missed. For more information about PRISM visit www.prism.ca.

Guitar legend and perfectly seasoned veteran, JERRY DOUCETTE needs no introduction. Who could forget “Mama Let Him Play”, “Down the Road”, “All I Wanna Do”, “Hey Hey, My My” and “Sittin’ Here”. A journeyman in every sense, he began to master the tradecraft of music with his father and uncle. Receiving his first guitar at age six, Jerry was in his first band The Reefers at the tender age of eight. By the time he had transitioned through Tribe, Brutus, Abernathy Shagnaster, Homestead and the Rocket – Norton Band Doucette was a true axe-master. In 1977, self-named DOUCETTE was born with the Platinum Album “Mama Let Him Play”. This success was followed by Gold Album “The Douce is Loose” (1979), spawning hit single “Nobody”. Earning the Juno for Most Promising Group of the Year (1979) proved he was on-track to superstar status. Jerry took control of his own destiny, reminding everyone of his diversity and genius with the album “Price of An Education”, returning to his raucous blues style with “Big Gov’t Man” and “Miracles”. Never second fiddle to anyone, JERRY DOUCETTE continues to deliver clean melodies and slick pop every time he takes the stage.

Rock.It Boy Entertainment presents PRISM with special guest JERRY DOUCETTE, Thursday November 22 at the Cascades Casino Summit Theatre in Langley. Tickets are available for $35.00 (plus Facility Fee and Service Charges). Charge by phone 604-530-2211 or online at www.ticketweb.ca Doors at 7:00PM. Show at 8:00PM.