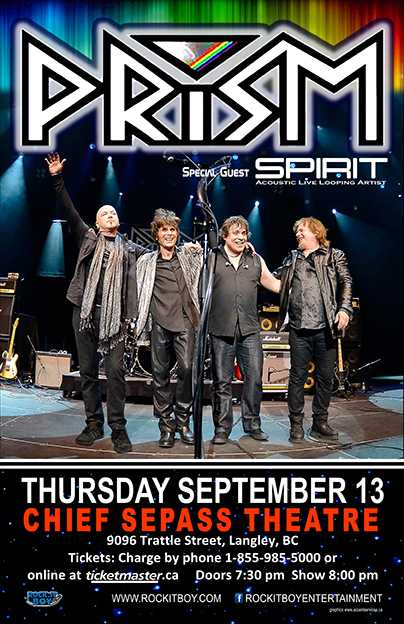 Thursday, September 13 at the Chief Sepass Theatre, 9096 Trattle Street, Fort Langley.
Tickets are $55.00 (Plus Facility Fee & Service Charges) at all Ticketmaster locations.
Charge by phone at 1-855-955-5000 or online at www.ticketmaster.ca.

Rock.It Boy Entertainment presents PRISM with Special Guest SPIRIT on Thursday, September 13 at the Chief Sepass Theatre in Fort Langley. Tickets are $55.00 (Plus Facility Fees & Service Charges) available at all Ticketmaster locations. Charge by phone at 1-855-955-5000 or online at www.ticketmaster.ca.

On Sunday, March 6, 2011 the crew of STS-133 Discovery were awakened by the soaring lyrics of “Spaceship Superstar” to begin the last day of that shuttle’s final mission. Such is the legacy of iconic rock group PRISM. An eclectic collection of amazing talent and musical styles, PRISM is the Canadian super-group. Rooted in and influenced by blues, rock and jazz, this spectacular band has a never-ending string of chart-topping hits including the unmistakable anthems “Spaceship Superstar”, “Take Me to The Kaptin” and “It’s Over” along with “Take Me Away”, “Flying”, “You’re Like The Wind”, “Armageddon”, “Virginia”, “Night to Remember”, “Young and Restless” and “Don’t Let Him Know”.

Like creating a painting, adding to the canvas with every stroke, until a masterpiece emerges, Acoustic Live-Looping Artist, SPIRIT uses his guitar and voice to create layers upon layers, with your ears as the canvas. His first 3 singles, “Give It All Back”, “Where, Oh Where” and title track “Hands” from his sophomore album “HANDS” (2018) were created using a modified version of the acoustic live-looping process; cutting through the creation and getting right to the song.

SPIRIT is also proficient with Percussion, Bass, Lead Guitar, and Rhythm Guitar. The sounds you hear at a performance are created organically through his acoustic guitar. All performances are live, with no pre-recorded tracks or synthesized sounds. With years of touring SPIRIT has become a seasoned artist, providing unique entertainment at every occasion.

Since placing Top 20 in the Vancouver area for CBC Searchlight 2013 with his song “Come To Think Of It”, he has sold out shows and opened for 54-40, PLATINUM BLONDE, and CHILLIWACK. He has performed at the Hard Rock Casino Vancouver Grand Opening and was invited to return to One Year Anniversary with BIF NAKED and EVERLAST. His first album “All The Pieces” (2014) saw the attachment of 2 videos, which by 2015, had gained over 100,000 YouTube views.