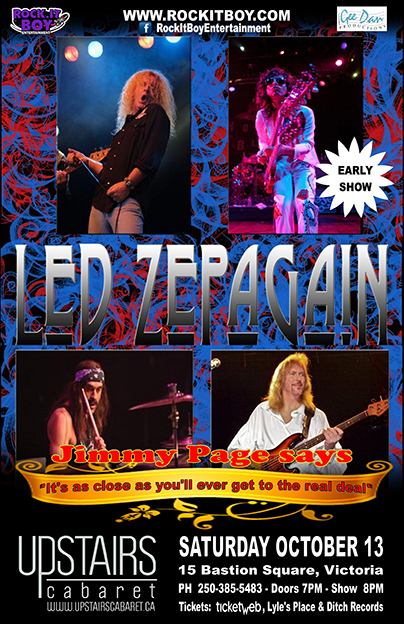 Jimmy Page Says, “It’s as close as you’ll ever get to the real deal”

Rock.It Boy Entertainment and Gee Dan Productions present LED ZEPAGAIN, for an Early Show Saturday, October 13 at the Upstairs Cabaret in Victoria. Doors open at 7:00PM and the show starts at 8:00PM. Tickets are available for $25.00 (plus Service Charges) at www.ticketweb.ca, Lyle’s Place, and Ditch Records.

Taking on the role of Jimmy Page is Christian Nesmith, son of famous MONKEE Michael Nesmith. After watching Page perform in Zeppelin’s live concert movie “The Song Remains the Same”, Nesmith settled his focus on guitar. An avid student of Page from age 13, his intense application of the tone and style of the master has made Christian Nesmith a master in his own right. With such inspiration Christian is the perfect Page! Has the student surpassed the teacher? See the show, witness the spectacle, you decide.

Irish-born and cutting his teeth on contemporary rock, lead singer David “Swan” Montgomery delivers an uncanny portrayal of Robert Plant. Commenting on how much Swan looked like Plant, Roger Daltry recently pulled him on stage by for a duet rendition of “Help From My Friends”. Swan has lent his voice to numerous recordings, including the widely released Witchblade Soundtrack, which featured such artists as G. Tom Mac and Roger Daltry.

Having studied drums and percussion with Carmine Appice, Joe Porcaro, and at the Berklee College of Music in Boston, Jim Kersey brings his amazing feel for the great, John “Bonzo” Bonham to LED ZEPAGAIN. This amazing drummer leaves audiences shouting for more after every performance of Zeppelin’s epic drum solo, “Moby Dick!”

Rock.It Boy Entertainment and Gee Dan Productions present LED ZEPAGAIN, for an Early Show, Saturday, October 13 at the Upstairs Cabaret in Victoria. Tickets are available for $25.00 (plus Service Charges) at www.ticketweb.ca, Lyle’s Place, and Ditch Records. Doors at 7:00PM. Show at 8:00PM.