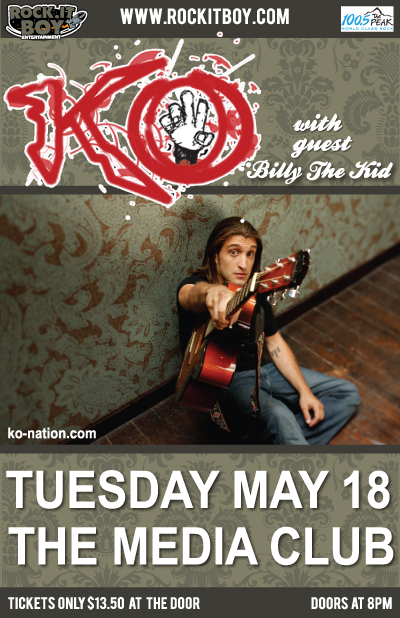 KO WITH GUEST BILLY THE KID

In concert Tuesday, May 18th at The Media Club in Vancouver

100.5 The PEAK and Rock.It Boy Entertainment are proud to present Warner Music recording artist KO in concert on Tuesday, May 18th in The Media Club on Cambie Street in Vancouver.  Tickets will be on sale at the door for $13.50. KO is the sound of the city.  He is a rapper, but he didn’t grow up poor. He plays an acoustic folk guitar while he raps but if this is folk – it is hard folk, concrete roots rap from a Toronto kid gone bad, real bad, and then cleaning up his life and shooting for good again. KO’s debut album Let’s Blaze (Warner Music Canada 2009), released last fall, is packed with witty, original singles worthy of mainstream airplay, and the album is never boring.  An occasional collaborator with Snoop Dogg  he combines strong vocals and a folk-country-rock feel with booming beats and a subtle hip-hop swagger. Ko Kapches was raised in a middle-class Greek family in the Queen and Broadview area in Toronto but he ended up in all the bad places and many of his songs come from that world, with titles like “Rehab’” “Bourbon (Crack Song),” “Drunk,” “Kurt Cobain” and “The Ballad of Jimmy Roscoe” which is about a man who killed four RCMP officers in 2005, painting some vivid pictures.  The subject matter may be rough but the groove is always sweet when KO starts playing with the beat. 100.5 The PEAK and Rock.It Boy Entertainment presents urban folk rapper KO in concert on Tuesday, May 18th at The Media Club located at 695 Cambie Street in Vancouver (Ph 604-608-2871).  Tickets will be on sale at the door for $13.50 Doors open at 8:00PM.