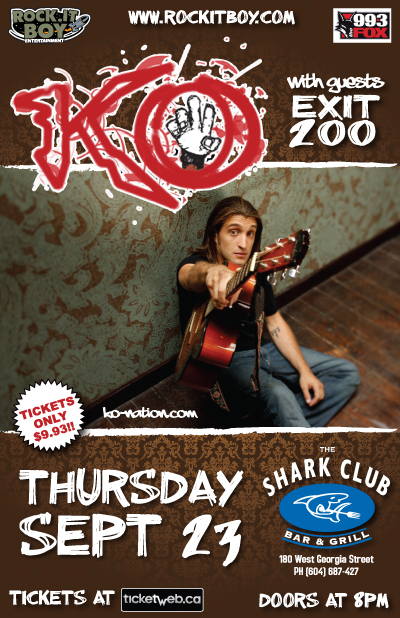 Rock.It Boy Entertainment and 99.3 THE FOX  present Warner Music recording artist KO in concert with special guest EXIT 200 in concert on Thursday, September 23rd at The Shark Club on Georgia Street in Vancouver.  Tickets are available for the low, low price of $9.93 at Ticketweb.ca . KO.  This week his song “Capable” is riding at #8 on the Fox Top 30, sandwiched between Slash and Buckcherry.  That is Ko Kapches for you.  He is no metal king with screaming guitars, in fact most of the time he plays his acoustic guitar in an almost folky style, but he fits right in because he is of the city.  His is the sound that a bleeding city makes when you take away the hustle and the noise of the traffic and get to the heart of the matter at four in the morning.  Then he gets noisy. KO’s debut album Let’s Blaze (Warner Music Canada 2009), released last fall, is packed with witty, original singles worthy of mainstream airplay, and the album is never boring.  An occasional collaborator with Snoop Dogg  he combines strong vocals and a folk-country-rock feel with booming beats and a subtle hip-hop swagger. Ko Kapches was raised in a middle-class Greek family in the Queen and Broadview area in Toronto but he ended up in all the bad places and many of his songs come from that world, with titles like “Rehab’” “Bourbon (Crack Song),” “Drunk,” “Kurt Cobain” and “The Ballad of Jimmy Roscoe” which is about a man who killed four RCMP officers in 2005, painting some vivid pictures.  The subject matter may be rough but the groove is always sweet when KO starts playing with the beat. Kicking off the show will be our own Valley Boys, EXIT 200, whose wickedly fun show and catchy songs are fast become a must-have on the local concert scene. Rock.It Boy Entertainment and 99.3 THE FOX  present Warner Music recording artist and urban rap/folk shaman KO in concert with special guest EXIT 200 on Thursday, September 23rd in The Shark Club located at 180 West Georgia Street in Vancouver.  Tickets are available for only $9.93 at Ticketweb.ca.  Doors open at 8PM.