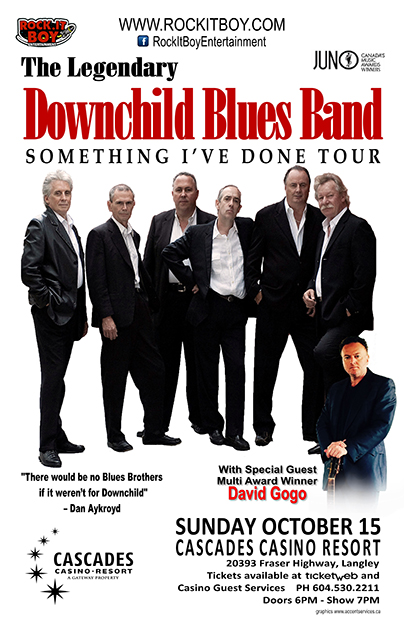 Can You Hear the Music

Sunday, October 15 at the Cascades Casino Resort Summit Theatre in Langley
Tickets are $49.50 (plus Facility Fee and Service Charges)
At Casino Guest Services (604-530-2211) and www.ticketweb.ca.

Canada’s best known and best loved blues outfit, THE LEGENDARY DOWNCHILD BLUES BAND celebrated their 45th Anniversary in style with the release of their Juno Award Blues Album of the Year (2014) “Can You Hear The Music”. With such classic hits as “Flip Flop & Fly”, “I Got Everything I Need (Almost)” and “Shotgun Blues”, Downchild has had a major impact here at home and established serious credentials around the world alongside contemporaries, B.B. King, John Lee Hooker and Buddy Guy. With their signature Jump-blues style and sweet, infectious sound, it’s a sure bet your toes will be tapping and your hips swinging.

Downchild’s 17th album, “Can You Hear the Music” starts the way all things Downchild should; with the jump blues sound that makes you want to jump up and dance. And, as band leader Donnie Walsh will tell you himself, that’s the sound Downchild audiences all over the world want to hear. The tracks “Scattered” and “One in a Million”, actually came together during the recording sessions.

Walsh and his band mates have won countless music industry awards, including a Juno Award for Best Roots and Traditional Album (1991). They also received a Juno Award nomination for Blues Album of The Year (2005) for their album “Come On In”. Yet, for all the hits and awards, THE LEGENDARY DOWNCHILD BLUES BAND is perhaps best known as the inspiration for the Dan Aykroyd, John Belushi hit film The Blues Brothers. In fact, Dan Aykroyd says, “There would be no Blues Brothers if it weren’t for Downchild.”

Always inspiring, THE LEGENDARY DOWNCHILD BLUES BAND is a Canadian institution and revered by blues fans around the world, with the icing being that they are sounding and performing better than ever!

An award-winning Blues guitarist, singer/songwriter, DAVID GOGO adds heart, soul and grit to the International Blues Scene. He has performed with the legendary B.B. King, Bo Diddley, George Thorogood, ZZ Top, and Johnny Winter. Gogo delivers Michael Jackson’s “The Way You Make Me Feel”, the Procol Harum nugget “Whisky Train”, the Doors’ under-appreciated “The Changeling”, “I Found a Love” by Wilson Pickett and Elmore James’ “Please Find My Baby” with the quintessential Gogo twist. An incredible showman with cutthroat wit and virtuosic blues guitar playing, he electrifies the stage with sizzling, hard-rocking blues filled with heavy grooves, grit and emotion.

DAVID GOGO’s groove-fueled blend of blues and rock is the basis for a singular and storied music career. His songs have been featured in film and television and are regularly played on blues radio programs the world over. He has earned numerous Canadian blues accolades, including five JUNO nominations, a Western Canadian Music Award, a CBC Saturday Night Blues Award, and multiple Maple Blues Awards including Guitarist of the Year (2017).