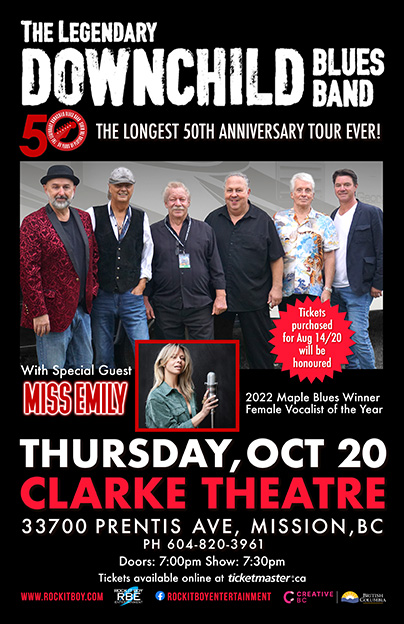 The Clarke Theatre in Mission Thursday, October 20, 2022
Tickets are $52.50 (Plus Facility Fee & Service Charges)
at all Ticketmaster locations or online at www.ticketmaster.ca.

On June 22, 2019 THE LEGENDARY DOWNCHILD BLUES BAND shut down Bloor Street West in Toronto to kick off their 50th Anniversary Tour in Canada, with a blues party for the ages at the TD Toronto Jazz Festival, to over 10,000 fans, who packed the street to catch a glimpse of the world-renowned band. Unfortunately, the pandemic hit, and the band had to postpone all their shows, but they’re back baby.

If THE LEGENDARY DOWNCHILD BLUES BAND didn’t exist, the blues world would have to invent them. One of the planet’s foremost, longest-running blues outfits Downchild has been roaring through high-octane performances since 1969. The current iteration might be the most electrifying yet. For proof, simply check out the sextet’s towering, lid-lifting, juke-joint–jumping 18th studio album, “Something I’ve Done”, a bona fide group effort and a sonic highlight in a 50-year career.

For more about THE LEGENDARY DOWNCHILD BLUES BAND visit downchild.com.

Miss Emily has captivated fans across Canada, the US, the UK and Western Europe with impassioned performances and incomparable vocals that soar to emotional heights spanning genres from soul and classic Motown to jazz, gospel and blues. An unparalleled work ethic from playing night after night in bars along Ontario’s 401 corridor while refining her songwriting garnered her national recognition in 2020. At the Maple Blues Awards in Toronto, Miss Emily walked away with Female Vocalist of the Year, New Artist of the Year and the Sapphire Canadian Blues Music Video Award. More recently she was nominated for the JUNO Blues Album of the Year for “Live at The Isabel” (2022)

From small beginnings when a 12-year-old Emily Fennell was winning accolades by channeling Ray Charles and Aretha Franklin, belting out song choices that belied her age, to a career characterized by fearless honesty and a constant connection to the roots of popular music Miss Emily has graced the stage with performances at Montreal Jazz Fest, Harvest Jazz and Blues, Ottawa Bluesfest, and Beaches Jazz Festival in Toronto.

Despite two decades of electrifying audiences in ten different countries, Miss Emily is just beginning to flourish. With three albums under her belt and more to come we’re excited to see what her future holds.