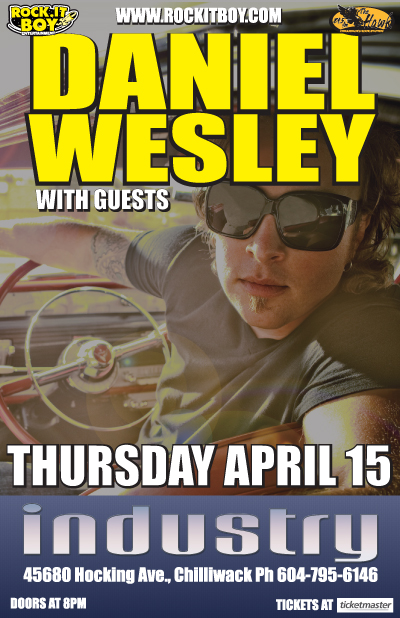 Tickets $22.50 (plus Service Charges) at all Ticketmaster outlets

Daniel is back and it is time to get the party on. 89.5 The Hawk & Rock.It Boy Entertainment are proud to present west coast groove rockers DANIEL WESLEY in concert with special guests  on Thursday, April 15th at Industry Nightclub in Chilliwack.  Tickets are available for $22.50 (plus Service Charges) from all Ticketmaster outlets. It had been a long road since his  youthful heyday with the Langley Ukulele Ensemble, but with the release of the self-titled fourth album last fall, DANIEL WESLEY the band, the songwriter, the entertainer has put a sonic stamp solidly on the Canadian music scene.  The latest album was produced by Dave Genn of 54-40 who helped create a great big wall of skankin’ guitar that drives the current single “It’ll Be You” which is still riding the Top 30 rock charts. From the beginning DANIEL WESLEY’s live shows have left the audience feeling good and wanting more.  In the winter of 2008, for two night’s running, Daniel Wesley mounted the stage before a sold out crowd at Vancouver’s 1000 capacity Commodore Ballroom. The venerable concert hall has seen its share of local artists, but Wesley’s extraordinary two-night stand was something different; a grass roots event without precedent, based on the cyclonic success of an independently produced, windswept reggae-bomb called “Ooo Ohh,” the most requested song of the year on 99.3 The Fox. Since then DANIEL WESLEY has signed a deal with 604 Records, toured China and the United States, and is fast becoming a household name across Canada with his rootsy rock and reggae sound, fusing old rhythm and blues lines with ska-like summer time grooves, and for his penchant for beach and surf and partying down in the west coast style.   Across the country and around the world they dream of being here, grooving on DANIEL WESLEY and a having a great time in the west.  Lets show them how it’s done! 89.5 The hawk & Rock.It Boy Entertainment present Langley’s very own DANIEL WESLEY in concert with guests on Thursday, April 15th at Industry Nightclub located at 45680 Hocking Ave. in Chilliwack (Phone 604-795-6146).  Tickets are $22.50 (plus Service Charges) at all Ticketmaster outlets(online at www.ticketmaster.ca or charge–by-phone at 604-280-4444).  Doors open at 8pm.