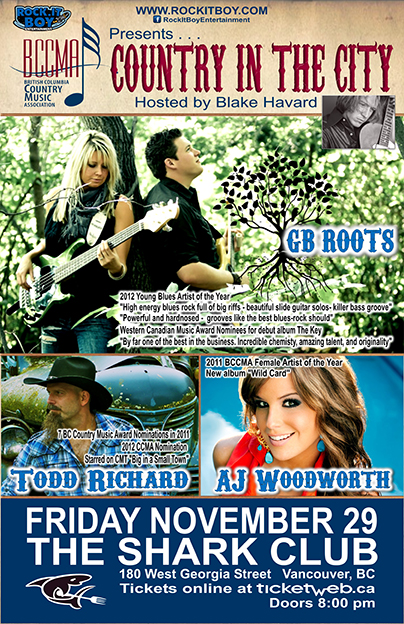 The Shark Club
180 West Georgia Street
Vancouver, BC
Get Directions

Country In The City Links

Country is alive and thrilling!

Rock.It Boy Entertainment proudly brings you THE BCCMA PRESENTS: COUNTRY IN THE CITY hosted by BLAKE HAVARD – featuring GB ROOTS with guests TODD RICHARD and AJ WOODWORTH, Friday November 29 at the Shark Club, 180 West Georgia Street, Vancouver. Tickets are $15.00 (plus Facility Fee and Service Charges) at TicketWeb. Charge by phone at 1-888-222-6608 or online at www.ticketweb.ca.

For a number of years local icon BLAKE HAVARD has been a part of the very fibre of the Vancouver music scene. He is well respected by his peers, the who’s who of the local music landscape. A dedicated and hard-working musician, Havard’s years of effort are set to pay dividends with the release of his new single “Wanted To Believe You”. It is true that we get by with a little help from our friends. The track was co-written with Pete Droge, mixed by mix master to the stars MIKE FRASER and mastered by Grammy winner Richard Dodd. With such a prestigious profile, BLAKE HAVARD is the perfect host for this event.

GB ROOTS is the powerful collaboration of Dave Barber and Kirby Green. Together they create an organic blend of rich vocals, a heavy modern Blues Rock feel and a hint of banjo. Their debut album “The Key” was recorded at the legendary Warehouse Studio in Vancouver, owned by Bryan Adams, with the incredible Eric Mosher (engineer/co-producer) and immensely talented musicians Jerry Adolphe and Tyson Naylor. The album combines the duo’s musical backgrounds, drawing from their Rock, Blues, Country, and Bluegrass roots. The perfect amalgam comes through loud and clear in the haunting “Swing Low” nominated for Jazz/Blues Song of the Year at the Covenant Awards (2013), “The Key” and the kicking “Shady Grove”, picked up by radio stations across the country. Green and Barber spent years honing their vocal and instrumental crafts working with artists throughout Canada and the USA, backing the likes of Michelle Wright, Carolyn Dawn Johnson, Chad Brownlee, Dallas Smith, Jason McCoy, The Higgins, Crystal Shawanda, Dean Brody and Karen Lee Batten.

Bill Bogwardt, Editor Country Music News Canada Publications states, “I have watched these two fine musicians and vocalists (GB Roots), really come on their own. Having witnessed their talent, dedication and drive, these two fine individuals will forge a distinct and noteworthy career.” Michelle Barstad, Events & Marketing Coordinator at the Apex Casino adds, “David Barber, Kirby Green & band of GB Roots were a pleasure to have at Apex Casino, performing on several occasions this past year. David & Kirby are professional to work with and put on an excellent show. Their experience in the industry and talent as performers really shows when they get on stage. I would recommend GB Roots to any venue that is looking for a great entertaining show!” Philp Muz, Booking Agent concludes, “GB Roots” are by far one of the best in the business. Incredible chemistry, amazing talent, and originality are what make up this killer Band”.

TODD RICHARD is one of the most distinct, refreshing artists on the country music scene today. His rich vocals and unique look have fans everywhere taking notice and they love the sight and sound. Being the total package earned Richard a mind-blowing seven BC Country Music Award Nominations for Album Of The Year, Fans’ Choice, Gaylord Wood Traditional Country, Male Vocalist Of The Year, Ray McCauley Horizon Award, SOCAN Songwriter Of The Year (“Zero To Hero” written by Rick Tippe) and Website Of The Year (2011). He released His first music video “Life Is About People” and three singles to Canadian Country Radio from his CD “Journey On” which earned a CCMA Nomination for Producer Bart McKay (2012). Todd also starred on CMT’s hit TV show “Big in a Small Town”. Chosen as one of only 30 Canadian entertainers to take part in the show, he made it to the season finale as one of the final six contestants! Having shared the stage with many of Country Music’s Top Acts including Dwight Yoakum, Dierks Bentley, Gord Bamford and rock legend Randy Bachman, it is definitely TODD RICHARD’s time to shine and share his talent with the world.

For more information about TODD RICHARD visit www.toddrichard.ca.
Winner of the Canadian Country Music Association New Artist Showcase Award (2009), AJ WOODWORTH is Canada’s new Country Music sensation. When you hear the explosive and passionate chorus of her sparkling personal anthem “Wild Card” you’re hearing the life story behind the ambitious turbo-powered voice. AJ has worked hard, overcome the odds and pushed through to become the British Columbia Country Music Awards’ Female Artist of the Year (2011). The excitement, the effort and the quiet sense of triumph are there in spades on her debut album “Wild Card”. Hear a two-timing snake get on the wrong side of his soon-to-be-ex on “One-Minute Man”, the exuberant escapism of the boisterous “Little Black Dress”, the burning intensity of “Hide Your Matches”, the feverish aggression of “Lovin’ That I Like You”, the heart-wrenching ballad “Good Time For A Goodbye” (featuring Kathleen Higgins), the frustration laden “Cold” and the spunky “Live It Up” (co written by Ramsay and Steve Marshall). AJ WOODWORTH delivers a captivating, cosmopolitan country sound and real songs for real women. Canada’s newest country dynamo is a true contender, jumping out of the gate with a superb rookie effort that offers attitude and then some!

Rock.It Boy Entertainment proudly brings you THE BCCMA PRESENTS: COUNTRY IN THE CITY hosted by BLAKE HAVARD – featuring GB ROOTS with guests TODD RICHARD and AJ WOODWORTH, Friday November 29 at the Shark Club, 180 West Georgia Street, Vancouver. Tickets are $15.00 (plus Facility Fee and Service Charges) at TicketWeb. Charge by phone at 1-888-222-6608 or online at www.ticketweb.ca. Doors at 8:00PM.