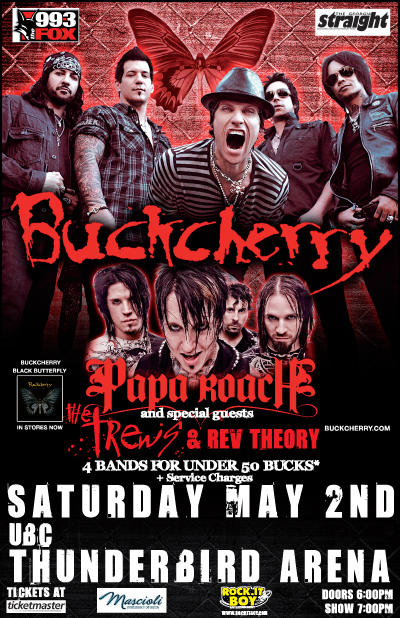 BUCKCHERRY with PAPA ROACH, THE TREWS and REV THEORY

THE BIG SHOW JUST GOT BIGGER

BUCKCHERRY in concert with PAPA ROACH

Plus! THE TREWS and REV THEORY just added!

Saturday, May 2nd at Thunderbird Arena on the UBC Campus

The kings of swagger are back, bigger and better, strutting their tattoos and taboos in the manner of the Glimmer Twins, Aerosmith and Guns & Roses before them. BUCKCKERRY the reigning champions of sex, rock and all out party are returning to raise a little hell.

Yes it is true. You can still see 4 BANDS FOR UNDER 50 BUCKS. 99.3 The Fox and Rock.It Boy Entertainment take pleasure in presenting the one and only BUCKCKERRY in concert on Saturday, May 2nd with PAPA ROACH, THE TREWS and REV THEORY at Thunderbird Arena on the UBC (University of British Columbia) campus. Tickets go on sale at all Ticketmaster outlets on Saturday, February 21st. BUCKCKERRY! Emboldened, enriched, inflamed, and re-invigorated by the success of their 2006 platinum selling, Grammy-nominated album 15 (which included the monster hits “Crazy Bitch” and “Sorry”), the hard rockin’ California quintet, led by explosive singer Josh Todd and guitarist Keith Nelson, returned last September with Black Butterfly, a twelve-song set that debuted at #8 on the US charts and has produced hits like the raunchy “Too Drunk,” “Don’t Go Away” and the latest single “Rescue Me.” BUCKCKERRY had its first brush with success when its self-titled debut album, driven by the hit single “Lit Up,” went gold in 1999.  They released Time Bomb in 2001, which yielded more radio hits like “Whiskey in the Morning” and “Ridin’.” Their record label underwent some changes and stopped supporting the band, which resulted in a four year-hiatus. But the wait was well worth it because BUCKCHERRY is back and better than ever before. BUCKCKERRY recorded its third album in only fifteen days and financed everything themselves, because they knew they had a good thing going.  When they released the album, entitled 15 (Eleven Seven Music/Atlantic Records), in April of 2006, and a crazy online viral campaign took on a life of its own, no one had any idea that nine months later the lead single “Crazy Bitch” would be nominated for a Grammy Award (Best Hard Rock Performance) along with superstars like Nine Inch Nails, System of a Down and Tool.  BUCKCKERRY delivers rock& roll Jerry Lee Lewis would be proud of, and the live show is not to be missed. Also on the bill is PAPA ROACH, a band about  to release its fifth major label album Metamorphosis, which will include the songs “Hollywood Whore” (pre-released last fall) and the brand new single “Lifeline,” a song which really rocked live last year on the 2008 Crue-Fest with Motley Crue. It took a decade of toil and sweat in the hard rock world before this four-piece that started out in high school in Vacaville, California hit the big time. PAPA ROACH really hit it big in 2000 with the album Infest (DreamWorks Records) which gave the metal world some of sweetest, cracking rock around and went triple platinum from sales in the US and took the band to Europe where they were suddenly all the rage.  They followed that debut with three more successful albums, Lovehatetradgedy (DreamWorks 2002), Getting Away with Murder (Geffen 2004) and The Paramour Sessions (Geffen 2006) and have sold over ten million albums worldwide because they deliver the goods on record and back it up twice as hard on stage. Canada’s contribution to this rock party is THE TREWS who hail from Antigonish, Nova Scotia and are one of the bands making some serious fans across the US with their distinct sound which has been described as “heavy, but airborne.”  Their first album House of Ill Fame 2003 (Bumstead Records) produced five singles – ‘Every Inambition,’ ‘Not Ready to Go,’ ‘Tired of Waiting,’ ‘Fleeting Trust’ and ‘Confessions.’ ‘Not Ready To Go’ became the most played track on Canadian rock radio in 2004 and earned them a CASBY and an East Coast Music award and a Juno nomination. THE TREWS, built around the brotherly team of Colin and John Macdonald, have a knack for making albums where almost every song could be a single. They followed up the successful first album with Den of Thieves (2005) and No Time for Later (2008) and have become a concert favourite as their fame grows.  ‘Hold Me in Your Arms’ The first single from No Time for Later, was premiered at the 2007 Grey Cup pre-game show and was just voted #1 in the “Best Hard Rock” song category at the 8th Annual Independent Music Awards in the US. REV THEORY brings that hard rocking two-guitar East Coast sound that makes video game designers and wrestling television producers go bonkers. Based in New York, they were formerly known as Revelation Theory, and made quite a splash with their first album Truth is Currency (2005) which featured the single ‘Slowburn’ which hit #27 on the US Mainstream Rock Music Charts. REV THEORY has come into the big spotlight with the latest album, Light it Up (2008 Interscope Records) which has produced the singles ‘Light it Up’ and ‘Hell Yeah’ which hit #25 and #18 on the US Charts respectively and are both huge in the television wrestling world.  ‘Light it Up’ became an official theme song of Wrestlemania.  These guys bring the action and are touring constantly because their live show is unstoppable. 4 BANDS FOR UNDER 50 BUCKS! 99.3 The Fox and Rock.It Boy Entertainment take pleasure in presenting the one and only BUCKCKERRY in concert on Saturday, May 2nd with PAPA ROACH, THE TREWS and REV THEORY atThunderbird Arena on the UBC (University of British Columbia) campus. Tickets go on sale at all Ticketmaster outlets (online at www.ticketmaster.ca or Charge-by-Phone at 604-280-4444) on Saturday, February 21st.