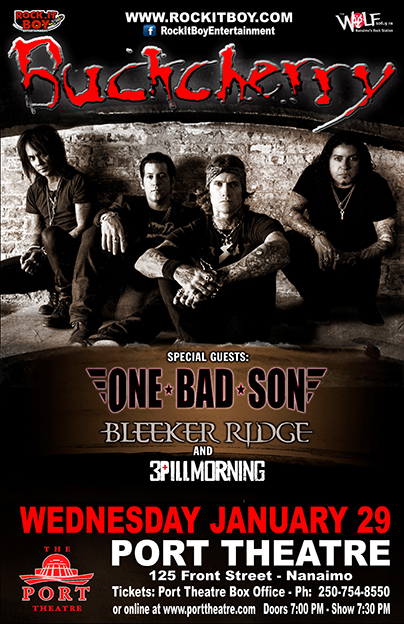 BUCKCHERRY WITH ONE BAD SON, BLEEKER RIDGE AND 3PILL MORNING

One out, Two more in!
BUCKCHERRY
with special guests
ONE BAD SON
BLEEKER RIDGE
and
3PILLMORNING

Rock.It Boy Entertainment is proud to announce that the show will go on! Circumstances have forced AIRBOURNE to withdraw from the concert. The awesome BUCKCHERRY will be joined by special guests ONE BAD SON, BLEEKER RIDGE and 3PILLMORNING.

As part of their North American headlining tour, definitive hard rock band BUCKCHERRY makes its first-ever visit to Vancouver Island. This multi-platinum powerhouse has firmly established itself with a massive presence on the radio and on the road! With six studio albums the band has produced 11 singles that hit the Top 40, including the Top 10’s, the jaw-dropping “Crazy Bitch”, which forever changed Rock radio, the massive crossover hit “Sorry”, “Riding”, “Everything” and “Too Drunk” and the #1 “Lit Up” on Billboard Mainstream Rock charts. Their album Confessions (2013) saw the release of “Gluttony” and “Nothing Left But Tears”. Formed in 1995 by lead vocalist Josh Todd and lead guitarist Keith Nelson, the band was reborn in 2005 with the founding duo still at the helm. They have never looked or sounded better!

Their debut album Buckcherry (1999) was released to critical praise and certified gold sales. The Platinum-selling album 15 (2006) proved to be a commercial and critical success, resurrecting the band with the hits “Crazy Bitch”, “Sorry”, “Everything” and “Next 2 You”. Their fourth album, Black Butterfly, was released on September 16, 2008, debuting at #8 on the Top 200 charts. It was the #1 rock album that week. Buckcherry’s fifth studio album, All Night Long (2010), debuted at #10 on the Billboard Top 200 Album chart and was the #1 Rock debut.
From the early days playing the Hollywood club scene through the tours opening for notables LENNY KRAVITZ, AC/DC and KISS to their well-earned status as headliners in their own right, BUCKCHERRY has quite literally done it all. The band was a part of the infamous Woodstock 99, Mötley Crüe’s Crüe Fest (2008) and the Kerrang! Week Of Rock Tour at the HMV Forum in London as well as Rocklahoma 2010 in Pryor, Oklahoma. Do not miss your chance to experience this incomparable band live and up close!

Vancouver’s One Bad Son is an honest rock ‘n’ roll band that cuts through the BS with a resolutely DIY approach. This is a tight-knit brotherhood with a reputation for crisp musicianship and explosive live shows. Their indie albums This Aggression Will Not Stand (2006) and Orange City (2007) led to the group playing sold out venues and embarking on a string of well-received national tours, propelling the outfit to high-profile opening slots for Godsmack, Buckcherry and Default. Their singles “Rustbucket” and “Retribution Blues” received Canada-wide radio play. Self-described as outsiders operating in their own bubble, they work their tails off to keep their loyal fan base and win over new ones as well. Give them a listen and join the ranks.

For more about ONE BAD SON please visit: www.onebadson.com.

3PILLMORNING was forged in the hard rock crucible of Minneapolis, the result of trial by fire. Music was never a question for this group and failure was never an option. The band today has emerged from a steady, consistent evolution from a rap-rock act, into an anthemic rock band no one can deny. The result, after 5 years and 500 shows, is a natural chemistry with spot-on focus and a rock-solid sound. It all came together to cement their spot as a national touring act sharing the stage with the Hollywood Undead, Sevendust, In This Moment and Trapt. Their road warrior spirit has built an inspiring fan base with diehard supporters nationwide. 3PILLMORNING has a specific vision of what they want to do, a vision portrayed in Technicolor with slick, fist pumping riffs, infectious melodies and an energy that can only be described as relentless. Their debut album Black Tie Love Affair landed at #62 on the Billboard Heat Seekers Chart. The lead single “Rain” raced into the Top 100 Active Rock Songs and their sleek video “Skin” is lighting up YouTube viewers worldwide. All signs point to 3PILLMORNING remaining on the radar for years to come.

BLEEKER RIDGE is a battle-tested quartet out of Ontario. Having found major label success and touring with some of the edgiest rock bands on the planet, the band has returned to its indie roots with their latest album, the hard-hitting, intense and gritty Four. The lead single, “Last Cigarette”, defines the new passion and edge that permeates all the tracks on the album. The moody “Sleep” and the surprising “I Feel Like I Don’t Belong” round out the band’s return to an unpolished, honest sound. They have taken charge of their careers to present a no-holds-barred rock and roll assault, turning inwards like a band of brothers to deliver their artistic vision. Bleeker Ridge is all about grit and authenticity taking listeners on a rollicking rock and roll ride.