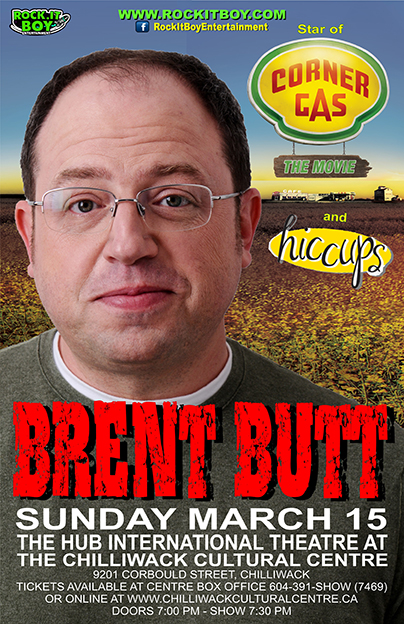 Sunday, March 15 at the Chilliwack Cultural Centre in Chilliwack.
Tickets are $39.50 (plus Facility Fee and Service Charges) from the Box Office. Charge by phone at 604-391-7469 or online at www.chilliwackculturalcentre.ca.

From small town Saskatchewan to the big screen, BRENT BUTT is one of Canada’s funniest and most successful comedians. Comedic storyteller, gifted writer, producer and actor, Brent created the hilarious “CORNER GAS”. It was an instant hit with unprecedented ratings, an International Emmy Award nomination (2004) and earning the moniker Funniest Show on TV from TV Guide readers. The Hollywood Reporter declared, “For the first time in a generation, the highest-rated sitcom on primetime schedules here is a Canadian show, not American” (March 2005). To follow up Canada’s #1 comedy, Brent created “HICCUPS”, a sitcom starring himself and Nancy Robertson winning multiple LEO Awards. Brent made the transition to the big screen as writer and star of the feature film “NO CLUE”. Fans anxiously awaited the much-anticipated return to Dog River with “CORNER GAS: THE MOVIE”, which hit theatres December 3, 2014. Brent is a regular at Just For Laughs as well as appearing on numerous national and international television programs. His meteoric career was the subject of an episode of the cultural affairs program Adrienne Clarkson Presents.

“I love what I do”, BRENT BUTT says. “I still look at it as just having coffee. Only now it’s with a thousand or so people at a time.”