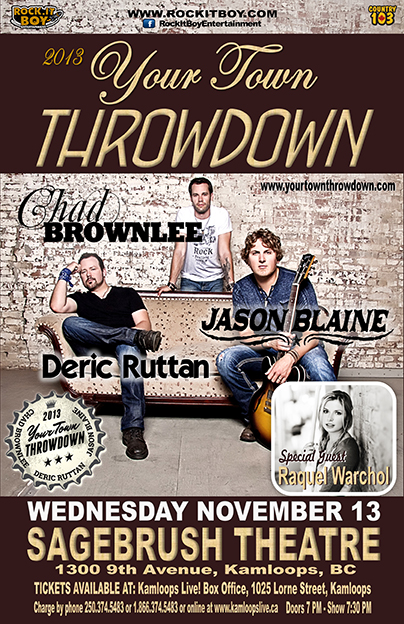 Grab your hats and shine your shoes! This is sure to be the hottest night in country music. Rock.It Boy Entertainment and Country 103 proudly present three Canadian stars, rocketing their way to the top of their genre, together on one stage for one night only. It’s the 2013 YOUR TOWN THROWDOWN featuring CHAD BROWNLEE, DERIC RUTTAN and JASON BLAINE Wednesday, November 13 at the Sagebrush Theatre in Kamloops. Tickets are $42.50 (Plus Facility Fees & Service Charges) at the Kamloops Live! Box Office, 1025 Lorne Street. Charge by Phone 250-374-5483 or 1-866-374-5483 or Online at www.kamloopslive.ca.

For more information on 2013 YOUR TOWN THROWDOWN visit www.yourtownthrowdown.com.

B.C. boy CHAD BROWNLEE made the hugely successful move from lacing up his skates as a Vancouver Canuck to pulling on his boots as Canada’s latest country superstar. His first single “Love Me Or Leave Me” cracked the top 10, reaching #8 on the BDS Country Spins and #10 on BDS Country Audience while “Smoke In The Rain” reached #8 on BDS Country Spins and #8 on BDS Country Audience. Other unforgettable tracks include “The Best That I Can (Superhero)”, “Hope”, “Hood of My Car”, “Day After You”, “Carried Away”, “Listen”, “Crash” and the incredible “Wagon Wheel”.

A wildly talented singer-songwriter, Brownlee has proven that his place in the world of country music is definitely on the rise. The track “Leave Here Dying Young”, a song in tribute to his father prompts Chad to share, “My Dad reminds me to always be young at heart no matter how old we are. I hope this video inspires the kid in all of us.” The video went viral, proving that CHAD BROWNLEE can touch something deep inside all of us. The industry agrees. He was nominated for the Canadian Country Music Award (CCMA) Rising Star Award (2010) and took home the Canadian Country Music Conference Best New Artist Showcase Award (2010). He was also the recipient of the Canadian Country Music Award for Rising Star (2011). From co-headlining The Boys of Fall National Tour with Dallas Smith to performing live on the national broadcast of the CCMA Awards show where he was also nominated for Male Artist of the Year, 2012 was a banner year for Chad. Most recently he earned the Juno Award nomination for the Country Album of the Year (2013). His partnership with the Tim Horton Children’s Foundation, mesmerizing live performances and rugged good looks all contribute to CHAD BROWNLEE stealing the hearts of his fans coast-to-coast.

Rock-solid stock of a prohibition era moonshiner, DERIC RUTTAN is a master at crafting the kind of song his listeners find their own lives reflected in. This truth is evident in the deeply personal “Main Street 1979”. His debut album yielded 5 Top Ten singles including “When You Come Around”, “Shine” and “Take The Wheel”. The second album produced 4 Canadian Country Radio hit singles including “Lovin’ You Is Killin’ Me”, “California Plates” and “Good Time”. In addition, Sunshine’s lead single, “Up All Night” was the most-played Canadian country single of 2010.

JASON BLAINE grabbed a guitar at 8 and started writing songs at 16. Country was a natural direction for him. His debut album included the Top 25 singles “Heartache Like Mine”, “While We Were Waiting” and “What I Can’t Forget.” The follow-up, Make My Move, hit the Top 5 on the Canadian Country Album Chart producing the Top 10 single “Rock In My Boot” and Top 5 single “Flirtin’ With Me”. Don’t forget “Cool”, “On a Night Like This”, “Rock It Country Girl!” and “They Don’t Make Em’ Like That Anymore”, a tribute to Jason’s grandfather, a man of virtue, conscience and humility who has been a great influence in Jason’s life.

A goal-driven songwriter, Jason says, “Song writing used to be easy until I got better at it. You learn how good something needs to be and the attention to detail. There’s a difference between a good song and a really, really good song.” He produces really, really good songs. His latest effort reflects the serious nature that results from dealing with life as a touring musician and saying thank you to the peacekeepers overseas. JASON BLAINE continues to work hard to deliver what his fans expect, what he likes and what works live, all with a healthy dose of fun.