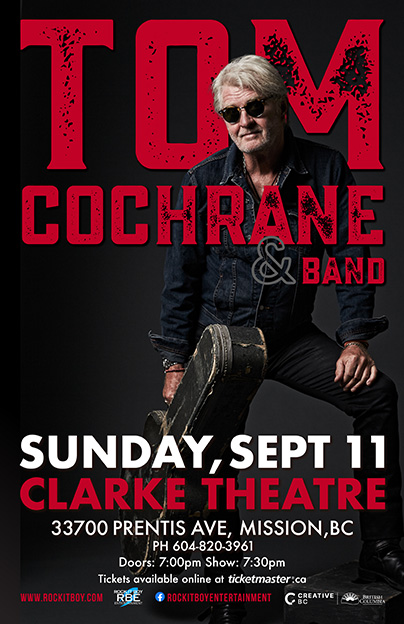 TICKETS ON SALE MAY 13TH!

The Clarke Theatre in Mission Sunday, September 11, 2022
Tickets are $89.50 (Plus Facility Fee & Service Charges) at all
Ticketmaster locations or online at www.ticketmaster.ca.

Canadian icon Tom Cochrane has achieved a level of success known to few recording artists.
A Canadian Music Hall of Fame inductee (2003), with an illustrious career spanning almost 50 years, Tom, as a solo artist and with Red Rider, has won numerous awards including 8 Juno Awards, 4 Pop Music Awards, National Achievement Award (2003), Composer and Songwriter of the Year (1992), Male Vocalist of the Year (1992), Album of the Year – Mad Mad World (1992), Single of the Year – “Life Is a Highway” (1992) and Group of the Year – Tom Cochrane & Red Rider (1987).

Over the course of his career as a solo artist and with Red Rider, he has released 21 albums with hits, “Lunatic Fringe”, “Victory Day”, “Human Race”, “Boy Inside the Man”, “White Hot” and the chart topper, “Big League”.

Launching his solo career with the release of the anthemic hit “Life Is a Highway” from the breakthrough album Mad Mad World, and selling over one million copies in Canada alone and another six million copies worldwide, giving it certified Diamond Status in Canada, Tom earned a Grammy Nomination (1992) in the United States.

His legacy as a Canadian icon has been cemented with a star on Canada’s Walk of Fame and a 322 km section of Manitoba’s provincial highway named “Tom Cochrane’s Life Is a Highway”, and he continues to tour with members of Red Rider as well as a solo artist, captivating and charming people everywhere, rooting his place in the hearts, minds, and ears of audiences with engaging performances, playing his multitude of crowd-pleasing hits.

Tom’s unwavering work on behalf of humanitarian causes and organizations is as equally noteworthy as his musical achievements. He has been a long-time supporter of World Vision as well as Amnesty International and War Child. Tom also spearheaded a CBC televised benefit concert for tsunami relief in Asia raising over $4 million in pledges.

Always generous with his time and talent, Tom Cochrane continues to donate to various charities and causes in Canada and around the world.