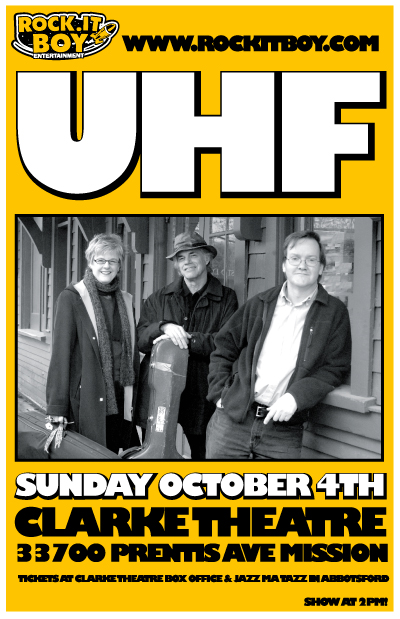 Come join three of Canada’s most unique and well-loved singer/songwriters in celebration of their 20th Anniversary as a trio.

Rock.It Boy Entertainment is proud to present Canada’s folk music super-group UHF (Ulrich, Henderson and Forbes) in  their 20th Anniversary Concert at 2:00PM on Sunday, October 4th at The Clarke Theatre in Mission. Tickets are on sale  $25.00 at the Clarke Theatre Box and at Jazz Ma Tazz in Abbotsford.

Shari Ulrich (Pied Pumkin), Bill Henderson (Chilliwack) and Roy Forbes, a brilliant a teaming of three disparate Canadian West Coast talents, first joined forces in 1989 for what was supposed to be a one time only appearance at the Vancouver Winter Roots Festival. The artistic and musical success of that first concert led to UHF quickly becoming a fixture on the Canadian music scene, leaving audiences calling for more of the powerful acoustic energy of this unique talent pool.

Vancouver-born Bill Henderson was best known as the long-time lead singer and songwriter of great Canadian classic rock songs with The  Collectors and Chilliwack . Shari Ulrich, an ex-Californian, had been a former key member of British Columbia’s Pied Pumkin, the Hometown Band, and a respected solo singer-songwriter while Roy Forbes (the artist formerly known as Bim) from Dawson Creek, BC was a long time formidable staple on the North American folk/roots circuit.

After twenty years and two successful recordings UHF continues to be fun for both the artists, who all have busy solo careers, and for the fans who still can’t get enough of their seamless blend of folk, country and pop delivered by three strong individuals in harmony.

Rock.It Boy Entertainment take pride in presenting the 20th Anniversary Concert of Canada’s folk music super-group UHF (Ulrich, Henderson and Forbes) in concert at 2:00PM on Sunday, October 4th at the Clarke Foundation Theatre in Mission. tickets are on sale  $25.00 at the Clarke Theatre Box and at Jazz Ma Tazz in Abbotsford (Ph 604-855-9166). Doors open at  1:30PM.  Show at 2:00PM