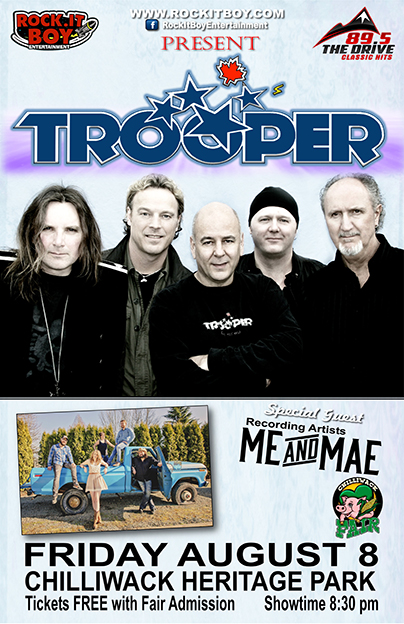 Raise a little hell for free!

TROOPER
with special guest
ME AND MAE

Rock.It Boy Entertainment and 89.5 The Drive proudly present TROOPER with Special Guest ME AND MAE on Friday August 8 at Chilliwack Heritage Park, 44140 Luckakuck Way in Chilliwack. Tickets are FREE with Fair admission.

TROOPER is The iconic Canadian band. From Vancouver to St John’s the band has woven its way into the fabric of this country like no other band has been able to do. The megahits “We’re Here for a Good Time (Not a Long Time)”, “Raise a Little Hell”, “The Boys in the Bright White Sportscar”, “Two For the Show”, “Pretty Lady”, “Good Ol’ General Hand Grenade”, “Round, Round We Go”, “Santa Maria” and “Janine” continue as prominent features in heavy radio rotation to this day. Their 6 times Platinum greatest hits album Hot Shots has been one of the biggest-selling albums in Canadian music history proudly standing as one of the country’s most enduring party soundtracks.

With millions of record sales, a couple dozen hits and ongoing sold-out shows across Canada, TROOPER has won practically every Canadian music award possible and been dubbed “Canada’s Greatest Party Band”. Their ten studio albums have earned multiple gold and platinum awards. Universal Music acknowledges them as “one of Canada’s top five selling bands of all time” and the Vancouver Sun has called them “Canadian rock heroes of the first order … the best performing band in Canada”. Their incredible performances and outstanding pop songwriting saw the band win the Juno Award for Band of The Year (1980). Trooper songwriters Ra McGuire and Brian Smith were awarded SOCAN’s prestigious National Achievement Award (2012) to acknowledge their significant and lasting contribution to Canada’s songwriting legacy.

ME & MAE is Shawn Meehan and Jacky Mae, who, with a little serendipity and an abundance of talent have found themselves BC’s newest Country stars. The band has forged a reputation as the one to watch on the Canadian Country Music scene. The band’s debut album Off the Rails, released in May, features the singles “Love Me, Leave Me Lonely” co-written by Carly Rae Jepsen and the sassy, sexy romp “What Cha Wearin’” as well as original covers of the Johnny Cash classic “Ring of Fire” and Dolly Parton’s peppy “9 to 5”. The album is a testament to Me and Mae’s ability to write songs featuring memorable vocal and melodic hooks incorporating a variety of styles to keep the material cutting edge and current, but still very original.

With a very focused and independent spirit ME & MAE is a on the road spreading their high-energy sound to fans throughout the heartland of country music. With momentum, talent and timing on their side, Me and Mae is poised to win over legions of fans looking for good, homegrown country music with a rock and roll sensibility and an ability to make folks want to dance, sing and perhaps even indulge in some enthusiastic texting.

For more information about ME & MAE visit www.meandmae.com.