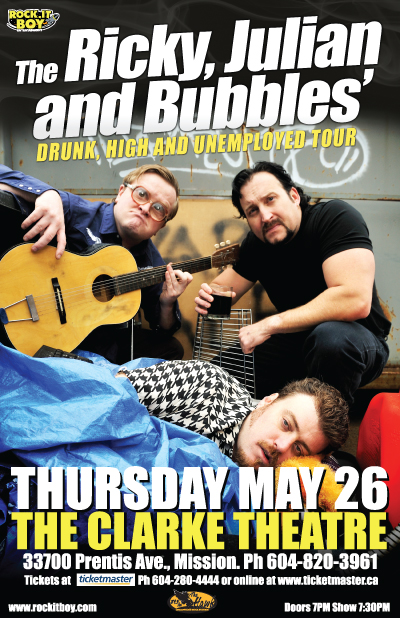 Advance Tickets $45.00 (Plus Facility Fees & Service Charges) at all Ticketmaster Locations, by Phone 604-280-4444 or Online at www.ticketmaster.ca.

Rock.It Boy Entertainment and Gee Dan present the Trailer Park Boys, Drunk, High and Unemployed Tour on Thursday, May 26 at The Clarke Theatre, Mission. Tickets are $45.00 (Plus Facility Fee and Service Charges) at all Ticketmaster locations, by phone 604-280-4444 or Online www.ticketmaster.ca.

Ricky, Julian and Bubbles of the Trailer Park Boys are constantly trying to figure out new ways to get rich, get high, and stay out of jail and now they’re back with a live show and this time they don’t have parole officers with them and they’re not on Community Service but they are DRUNK, HIGH and UNEMPLOYED! But not for long if Bubbles has his way! Spend an evening with the Boys as Bubbles tries to create a new career for himself in the movie industry, Julian puts his latest money making scams into action and Ricky has an idea that can ‘change the world!”

Trailer Park Boys is a popular Canadian mockumentary television series focusing on the misadventures of a group of trailer park residents and most notable of the series are the lead characters Ricky, Julian and Bubbles. The Trailer Park Boys show has been a huge success on the cable network “Showcase”, where it still sits as one of the network’s highest rated series ever! The series was so popular that it also sparked two movies, Trailer Park Boys: The Movie (2009) and Trailer Park Boys: Countdown to Liquor Day (2009).

Robb Wells (Ricky) hails from Moncton, New Brunswick. Since the last season of Trailer Park Boys, Robb has had little down time. He starred as Joe in the U.S. feature film “Hole-In-One”, and appeared as a featured guest of the band Our Lady Peace on their cross Canada “Fear of The Trailer Park” tour. Robb also joined John Paul (Julian) and Mike Smith (Bubbles) as guest stars in the video, “The Darkest One”, by The Tragically Hip.

John Paul Tremblay (Julian) was born and raised in Halifax, Nova Scotia. The success of Trailer Park Boys has opened many new doors for John Paul both here in Canada as well as south of the border. Such credits include “Virginia’s Run” and the lead role of Moe in the U.S feature film “Hole-In-One” both starring his Trailer Park co-star Robb Wells. Neither Robb nor John Paul has appeared in a film without the other.

Mike Smith (Bubbles) was born and raised in Thorburn, Nova Scotia. Mike composed music for film and television and has worked as a sound mixer on such feature films as, “The Weight of Water” and “Serendipity”. While sound mixing on the Trailer Park Boys pilot, Mike met Robb Wells and John Paul Tremblay. Goofing around one day on set, Mike was imitating a character he had been doing for years and Mike Clattenburg decided to write the character into the series and the lovable Bubbles was born. More recently, Mike worked on the US cable pilot called “Espia” as writer and musical director and appeared as Bubbles in the music video “Legal” by Canadian artist Snow.