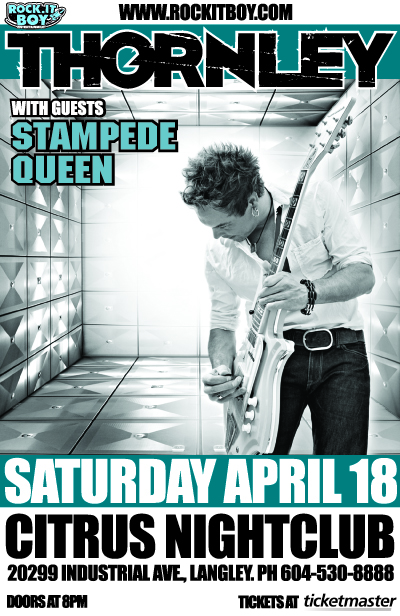 The Citrus Nightclub in Langley is getting a reputation as a great venue to catch some of the best rock acts around.  Rock.It Boy Entertainment is proud to present the long-awaited return of 604 Records recording artist THORNLEY in concert with special guests STAMPEDE QUEEN on Saturday, April 18th at the Citrus Nightclub in Langley. Formed by Ian Thornley after the breakup of his previous band Big Wreck, the THORNLEY debut album Come Again (604 Records), was released, with help from Chad Kroeger of Nickelback, in 2004 and produced five singles, the biggest of which were the title track “Come Again” and “So Far, So Good” which both hit #1 in Canada and made some serious dents in the US charts as well.  In 2005 THORNLEY was nominated for New Group of the Year and Rock Album of The Year at the Juno Awards.. Add THORNLEY’s commercial success to the fact that Ian Thornley really backs up his music by putting his heart and soul into every show he plays, there were hundreds of thousands of new fans across the continent waiting impatiently for some new music. It took a little over four years between albums which, in the music business, is an eternity.  The most impatient and eager of all was Ian Thornley himself, a man bursting at the seams with excitement and energy and music. The new album Tiny Pictures finally hit the stores this February and it’s like no time passed at all. The  band is touring.  People are rocking.  Songs are on the radio. The kick-off single “Make Believe”  was co-written with local hit writer Dave Genn (54/40, Mathew Good Band) as is currently riding at #8 on the charts of CFOX 99.3 FM.   The album was produced by three-time Grammy winner Nick Raskulinecz, who produced the Foo Fighters “One By One” and is filled with all kinds of musical magic. Thornley himself played all the guitars and basses on the record, with Nickelback’s Daniel Adair lying the beats on eleven of the tracks.  The wait is over.  Now it’s time to party. STAMPEDE QUEEN do not do ‘allegorical’ or ‘double entendre’ or ‘ punky rock with an edge.’ These guys play Hot & Horny, Heart-Pounding, Fist-Raising, Whiskey-Swillin’in your face Rock & Roll, the kind that brings to mind, Bon Scott’s AC/DC, Cheap Trick or Guns ‘n Roses. They have two albums, A Night At The Cockfights and Stampede Queen released by Texas-based Perris Records and a third on the way. STAMPEDE QUEEN has one message: old school rock is back…to stay! Rock.It Boy Entertainment is proud to present THORNLEY in concert with special guests STAMPEDE QUEEN on Saturday, April 18th at Citrus Nightclub located .at 20299 Industrial Ave., Langley (Ph 604-530-8888).   Advance tickets are now available for $22.50 (plus Service Charges) from all Ticketmaster outlets (online at www.ticketmaster.ca or Charge-by-Phone at 604-280-4444). The doors open at 8:00PM. .