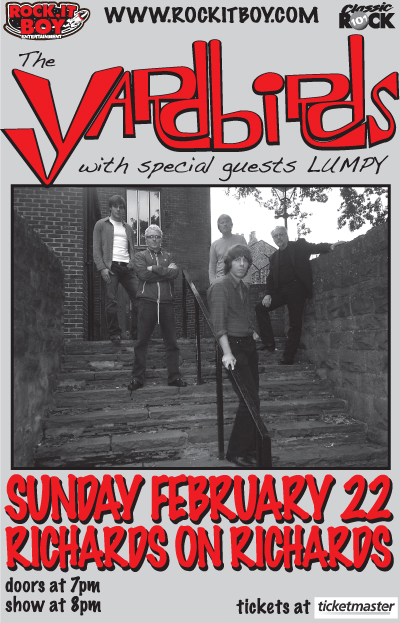 Richards On Richards
1036 Richards Street
Vancouver, BC
Get Directions

ROCK 101, Vancouver’s home of classic rock, and Rock.It Boy Entertainment are proud to present the sixties rock band that created the British sound of hard  psychedelic guitar rock, THE YARDBIRDS with special guests, in concert on Sunday, February 22nd at Richards On Richards in Vancouver.

THE YARDBIRDS’ career is one of rock music’s legends. It is the band that introduced the three greatest British guitar players to the world: Eric Clapton, Jeff Beck and Jimmy Page.  They recorded classics that just keep on playing; songs like ‘Shapes of Things’, ‘Train Kept A Rolling’, ‘For Your Love’ and Led Zeppelin’s ‘Dazed and Confused.’

They created hard rock out of standard twelve-bar blues, doubling the tempos and whacking the amps up to ten. On the British club scene, THE YARDBIRDS, the Animals, and the Rolling Stones ruled the stages. They expanded the range of the electric guitar, experimenting with feedback, sustain, and fuzztone. THE YARDBIRDS were the bridge between the white R&B of early-sixties London and the fuzz-toned psychedelia and power-chorded heavy metal much later in the decade.

THE YARDBIRDS disbanded in 1968 and went on to other careers, only reforming in the mid nineties after being inducted into the Rock & Roll Hall of Fame in Cleveland, Ohio. Jimmy Page formed The New Yardbirds then renamed them Led Zeppelin.  Vocalist Keith Reif died after being electrocuted in his studio in 1976. In the mid-eighties drummer Jim McCarty, rhythm guitar/bass player Chris Dreja and bassist/producer Paul Samwell-Smith (who produced all of Cat Stevens’ hits) came together in a sort of reunion and performed for a few years under the name Box of Frogs, often with Jeff Beck and Jimmy Page plus various friends with whom they’d all recorded over the years.

The reformed YARDBIRDS is in demand everywhere, and they have been blowing minds from Texas to Denmark to the UK to Paris with the new line-up which includes John Idan (bass, vocals), the sizzling Ben King on guitar and Billy Boy Miskimmin on the harmonica along with Jim McCarty and Chris Dreja.  After 35 years without an album THE YARDBIRDS recorded Birdland (2003 Favored Nations Records), helped along with stellar solos and guest appearances by Jeff Beck, Slash (Velvet Revolver, Guns ‘n Roses), Joe Satriani, Steve Vai, Jeff ‘Skunk’ Baxter (Doobie Bros) and Brian may of Queen.  The album has eight supersonic remakes of classic YARDBIRDS songs from the sixties and seven new tracks penned by McCarty and Dreja.  They are back.

You may not have been there is the sixties but you still have a chance to say “I saw THE YARDBIRDS up close in a small club.”  ROCK 101 and Rock.It Boy are proud to present pop stars, rock legends and psychedelic pioneers, THE YARDBIRDS with special guests, in concert on Sunday, February 22nd at Richards on Richards, 1036 Richards St., Vancouver (phone 604 687 6794).  Advance tickets go on sale on Friday, December 12th for $45 (plus Service Charges) at all Ticketmaster outlets (online at www.ticketmaster.ca or Charge-by-Phone at 604-280-4444).  Doors open at 7PM.  Show at 8PM.