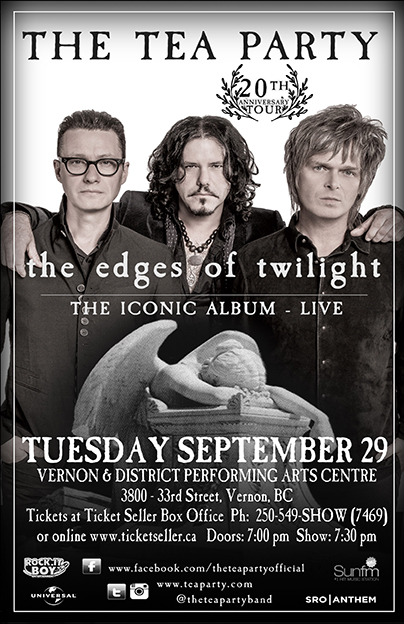 THE TEA PARTY
THE EDGES OF TWILIGHT
THE ICONIC ALBUM – LIVE

Tuesday, September 29 at the Vernon Performing Arts Centre in Vernon.
Tickets are $39.50 (plus Facility Fee and Service Charges) from the box office.
Charge by phone 250-549-SHOW (7469) or online at www.www.ticketseller.ca.

To commemorate the 20th anniversary of The Edges of Twilight, THE TEA PARTY have announced the release of a deluxe remastered CD, remastered LP, and a North American tour. It has been 20 years since the group released the iconic album featuring such singles as Sister Awake and The Bazaar. The band will kick off the tour in Windsor, ON, on September 4th for two HOMETOWN SHOWS at the Olde Walkerville Theatre. The tour will stop all across Canada, and fans can look forward to seeing the band perform the album in its entirety. Tickets go on sale this Friday, June 26th and the remastered album will be released on September 4th with Universal Music Canada, the country’s leading music company.

The three founding members of the band, Jeff Martin, Jeff Burrows and Stuart Chatwood are looking forward to sharing this album with their fans again. Frontman Martin says; “People often ask me ‘what does The Edges of Twilight mean to me as a musician?’ My answer, although not so simple, is simply this: it was the crystallization and the manifestation of an incredible musical vision between the three of us, and the fact that it was achieved in such a way was probably, and is still, one of the proudest musical achievements of my life.”

While Burrows (drums) “remembers writing a lot of that with the guys just in a basement in our hometown, which was the most ironic part about it because it turned into such a worldly album. With all of the pieces and parts connected to it, it was just an interesting growth from where we came from to where we wanted to go, and where we ended up.”

Chatwood (bass and keys) shares how the band’s travels strongly influenced this album. “After we came off the road for ‘Splendor Solis’ the time was set for us to head to the studio for ‘Edges of Twilight’ and our musical travels informed that record, and we expanded the band’s sound going in the direction of incorporating world music instruments. So, it was just a monumental record of our career and it sort of set the main signpost that dictated where the band was to head musically for the subsequent releases.”

VIP packages for the tour will be available through MapleMusic beginning this Friday at 10am EST at http://www.ticketbreak.com/theteaparty. The band will also launch a PledgeMusic campaign on Friday, which will include a chance to purchase memorabilia, ticket bundles and so much more. All of the details for pre-order bundles can be found at www.pledgemusic.com/projects/tea-party-eot20. General ticket sales begin on Friday, details will be made available on the band’s website at www.teaparty.com.

The Edges of Twilight, originally released on March 28, 1995, hit double platinum and was nominated for two Junos. The title of the album was taken from a chapter of the book Fire in the Head, by American author Tom Cowan, which also inspired the name of the first track on the album. Universal Music Canada will release both a deluxe edition CD of the album and a 2LP 180 Gram Heavyweight Vinyl edition of the original release. The 2-CD Deluxe, Digital Deluxe, Mfit & Vinyl Editions will include newly remastered audio. The deluxe CD and digital deluxe will also include a second bonus disc that will consist of alternate, live, radio sessions and bonus audio and the booklet will feature the story of the album with new band interviews and previously unseen photos. The Vinyl edition will include the newly remastered audio across 2 x 180 gram heavyweight vinyl that will be housed in a gatefold sleeve. Pre-order here – 2 CD: http://amzn.to/1IRNhW1 / 2LP: http://amzn.to/1GveFrS.

For more information about THE TEA PARTY please visit: www.teaparty.com