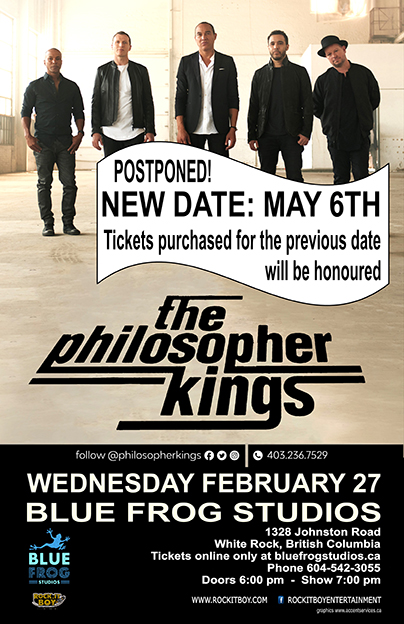 CONCERT POSTPONED
TICKETS WILL BE HONORED

Rock.It Boy Entertainment regrets to announce that, due to unforeseen circumstances, THE PHILOSOPHER KINGS, originally scheduled for Wednesday, February 27 has been postponed to Monday, May 6 at Blue Frog Studios, 1328 Johnston Road, White Rock. Tickets purchased for the original date will be honoured.

Two decades ago, THE PHILOSOPHER KINGS took the Canadian music industry by storm with their infectious melodies, undeniable energy and a unique combination of pop and alternative rock. The eminently memorable, groove-infused songs “I Am the Man”, “Cry”, “Hurts to Love You”, “Give Back the Love”, “Charms” and “Castles in the Sand” are but a few examples of what made them a live event favourite.

The band’s self-titled debut album (1994) spawned the hit single “Charms”, which landed on the U.S. Top 40. The album eventually earned Gold status in Canada. Their commercial, critical and popular breakthrough occurred with the release of the second album, “Famous, Rich and Beautiful” (1997), which was certified Platinum. They also won a Juno Award for Best New Group (1996).

In 2006, the band took a hiatus as the members of the group became busy with individual producing and recording projects. Fast forward to 2017, THE PHILOSOPHER KINGS reunited with a renewed energy, revitalized focus and brand-new material. The lineup is comprised of long-time members Gerald Eaton (vocals), drummer Denton Whited, keyboardist Jon Levine and guitarists James Bryan and Brian West.

As busy and fulfilled as they are with their individual careers, the call from fans to return to THE PHILOSOPHER KINGS fold could no longer be resisted and the band members are thrilled to be able to bring their songs, their superior showmanship and their high-octane, invigorating live shows to stages worldwide.

For more about THE PHILOSOPHER KINGS visit www.philosopherkings.com.