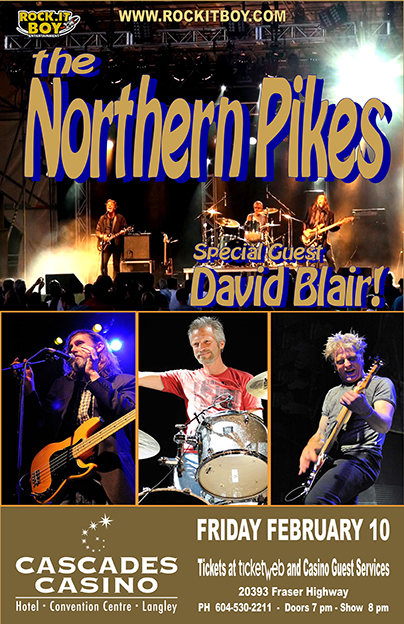 VANCOUVER’S OWN DAVID BLAIR ADDED TO THE BILL!

Rock.It Boy Entertainment presents THE NORTHERN PIKES with Special Guest DAVID BLAIR, Friday, February 10 at the Cascades Casino Summit Theatre in Langley. Tickets are available for $32.50 (plus Facility Fee and Service Charges) at www.ticketweb.ca and from Casino Guest Services.

Vancouver’s own DAVID BLAIR has been added to the billboard. With his songs, “Stronger Higher Faster”, “Thing Called Love”, “This Is The Soundtrack”, “I Want To Fall” and “Hurts So Hard”, he will heal your soul. Classically trained in piano from the age of 3 and joining his first band at 17, DAVID BLAIR has played countless shows around Vancouver and opened for the likes of Nickelback and Barstool Prophets. Blair’s first solo EP, Songs of Love and Introspection (2007) earned him the Best Adult Contemporary Album Toronto Exclusive Magazine Award (2008) as well as honourable mention in the Billboard World Songwriting Competition (2009). DAVID BLAIR has showcased his music at several World Music Festivals and toured across North America from New York to Toronto, to L.A., playing such venues as the Viper Room and the House of Blues in Hollywood. His newest album Things Left Unsaid (2009) was released to rave reviews and saw his first single ‘Hurts So Hard’ aired on six radio stations across Canada.

Adding the very best in easy listening, DAVID BLAIR brings the perfect counterpoint to the hard hitting NORTHERN PIKES. This will be a blockbuster show.

For more information on this artist please visit www.davidblairmusic.com

THE NORTHERN PIKES have definitely made their mark on the rock scene. With their powerhouse hit “She Aint Pretty” THE NORTHERN PIKES took their place as superstars. Come and enjoy other favorites: “Teenland”, “Things I Do For Money”, “Girl With A Problem”, “Believe”, “Hopes Go Astray”, “Dream Away”, and “Twister”.

THE NORTHERN PIKES have a sound and message as relevant today as it was when they began. Everyone that loves to get loud and proud has got to see this show! THE NORTHERN PIKES – Canadian roots rock at its finest.

For more information about THE NORTHERN PIKES please visit www.thepikes.com.

Rock.It Boy Entertainment is pleased to present THE NORTHERN PIKES with Special Guest DAVID BLAIR, live on Friday, February 10 at Cascades Casino Summit Theatre located at 20393 Fraser Highway in Langley (phone 604-530-2211). Tickets are available for $32.50 (plus Facility Fee and Service Charges) from Casino Guest Services and at www.ticketweb.ca. Doors at 7:00 pm. Show at 8:00 pm.