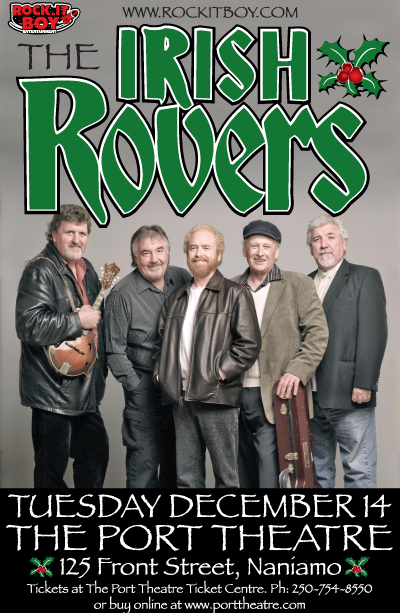 Tickets $42.00 at The Port Theatre Ticket Centre or on-line at www.porttheatre.com

It looks like we might be having a green Christmas this year! Rock.It Boy Entertainment is very pleased to present THE IRISH ROVERS in concert on Tuesday, December 14th in the Port Theatre located on Front Street in Nanaimo.  Tickets are now on sale for $42.00 at The Port Theatre Ticket Centre or online at www.porttheatre.com. The IRISH ROVERS blazed an immigrant Celtic trail from Canada and on to the folk explosion in mid-sixties California and over the years into a category all their own.  Their second album in 1967, included a simple little song called “The Unicorn”, which became a million-selling hit for THE IRISH ROVERS.  Wilcil McDowell joined up at that point, and the band continued to tour and to host a weekly music series on CBC Television. In 1980-81 the IRISH ROVERS scored another huge hit with in both the country and pop markets with  “Wasn’t That A Party,” which was written by U.S. folksinger Tom Paxton and then firmly established themselves in the seasonal catalogue with “Grandma Got Run-Over by a Reindeer” in 1982 and their popular Christmas shows are liberally sprinkled with classic carols like “Good King Wenceslas“ and “Silent Night“ plus nostalgic songs like “Bells Over Belfast“ and “Christmas in Killarney” to give the homesick heartstrings a twang. They have put out 35 albums over the years, the latest being Gracehill Fair released this year on Rovers Records. The IRISH ROVERS still perform constantly around the world with original members George Millar and Wilcil McDowell.  Completing The Irish Rovers line-up today are John Reynolds from Belfast, Sean O’Driscoll from Cork, Ian Millar from Ballymena and percussionist Fred Graham from Belfast.  Like the Unicorn, the IRISH ROVERS are legendary and magical, and a good time is guaranteed for all. Get the gang together and take a break from the Christmas rush and join the boys themselves, IRISH ROVERS in concert on Tuesday, December 14th in the Port Theatre located at 125 Front Street in Nanaimo (phone 250-754-8550).  Tickets are available for $42.00 from The Port Theatre Ticket Centre (phone 250-754-8550) or online at www.porttheatre.com.  Doors at 7PM.  Show at 7:30PM.