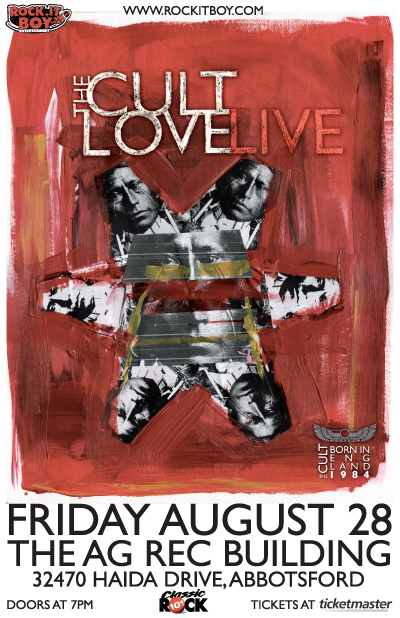 The Ag-Rec Building
32470 Haida Drive
Abbotsford, BC
Get Directions

Friday, August 28th at the Ag-Rec Building in Abbotsford

Tickets go on sale Saturday, May 30th for $47.50 (plus service charges) at all Ticketmaster outlets

What a way to end off the summer!  Classic ROCK 101 and Rock.It Boy Entertainment present the only Lower Mainland appearance of THE CULT – “Love” Live in concert at the Ag-Rec Building in Abbotsford on Friday, August 28th.   Tickets will go on sale for $47.50 (plus service charges).

at all Ticketmaster outlets on Saturday, May 30th.

THE CULT was formed in England in 1983, becoming perhaps the definitive rock band of the eighties; the band that kept the rock flag flying in an era of synth-pop, glam and creative hair, opening the door for groups like Guns ‘n Roses and Metallica.  Fronted by the sometimes mystical, sometimes half-crazy human spirit-man Ian Astbury and his writing partner, guitar wizard Billy Duffy, they recently released their eighth studio album BORN INTO THIS (2007 Roadrunner Records) and are back on the road doing what they do best.

THE CULT first captured the imagination of North America  with their second album LOVE, released in 1985, and the single “She Sells Sanctuary.”  Their concerts were nothing short of explosive and have become legend.  The next album ELECTRIC sealed the bargain with some of the finest rock recorded in the eighties and the single “Love Removal Machine” made THE CULT a staple on Rock radio.

Then came 1989’s SONIC TEMPLE produced by in Vancouver by Bob Rock. “Fire Woman,” “American Horse,” “New York City,” “Edie(Ciao Baby).”  Every track was a classic with monster guitar riffs and huge drums and THE CULT became rock legends.  There have been a few ‘break-ups’ over the years but Ian and Billy always get back together.  After the last split in 2005, Astbury spent a couple of years as the “Lizard King,” filling in for that other mystical rock poet Jim Morrison along with the original DOORS players Jim Densmore and Ray Manzarek.  But now THE CULT is back.

Classic ROCK 101 and Rock.It Boy Entertainment are proud to present the only Lower Mainland performance of THE CULT – “Love” Live in concert on Friday, August 28th at the Ag-Rec Building located at 32470 Haida Drive in Abbotsford . Doors open at 7PM with the show at 8PM.  Tickets will go on sale for $47.50 (plus service charges) at all Ticketmaster outlets (charge–by-phone at 604-280-4444 or online at www.ticketmaster.ca) on Saturday, May 30th.