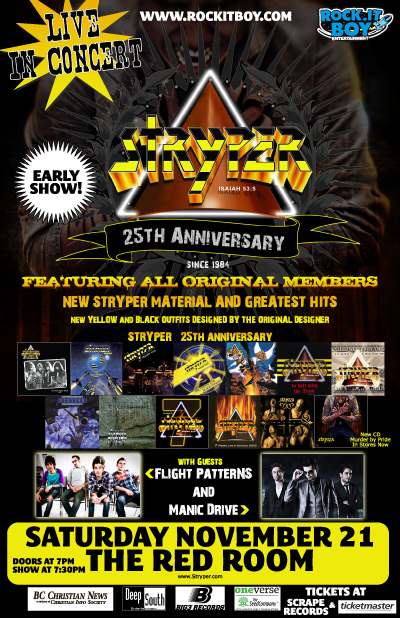 The Red Room
398 Richards Street
Vancouver, BC
Get Directions

Tickets on sale $32.50 (plus Service Charges) at all Ticketmaster outlets and Scrape Records.

Rock.It Boy Entertainment presents Christian Metal icons STRYPER –  the 25th Anniversary Tour, in concert on Saturday, November 21st at The Red Room, 398 Richards Street, in Vancouver.  Tickets are on sale for $32.50 (plus Service Charges) at all Ticketmaster outlets and Scrape Records.

In 1984, STRYPER broke onto the scene with their debut EP Yellow and Black Attack (Enigma Records), and have since gone on to sell eight million albums and tour the world spreading their message using heavy guitars and pristine harmony vocals all wrapped in skin tight yellow and black striped rock-god outfits that drove the devil insane.

The group’s unprecedented 1986 album To Hell with the Devil was the first Christian album to go platinum and was named one of the “100 Greatest Albums in Christian Music.”  STRYPER was also the first Christian band to get airplay on MTV, where they had several hit videos, including the #1 “Most Requested” videos “Free” and “Honestly”.

A quarter of a century later, in September 2009, STRYPER kicked off their North American 25th Anniversary Tour in the city of Boston with the rock group Boston’s founder, guitar maestro Tom Scholz, joining the band for a rendition of “Peace of Mind,” a version of which can be found on the latest STRYPER album Murder by Pride (Enigma Music 2009).

All four STRYPER original members – Michael Sweet (vocals/guitar), Oz Fox (guitar), Robert Sweet (drums) and Tim Gaines (bass) – will take to the stage to perform their hits and fan favourites, as well as new material from Murder by Pride.  And yes – they will be performing in all new yellow and black stage outfits from the original designer.