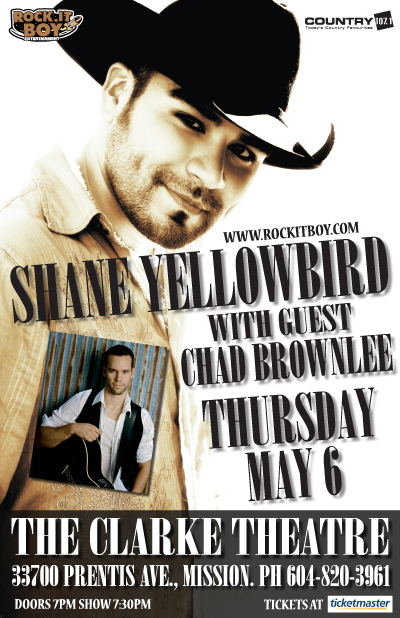 In concert Thursday, May 6th – Clarke Foundation Theatre in Mission

Tickets on sale Saturday, February 27th – $25 (plus Service Charges) at all Ticketmaster outlets.

Country 107.1 and Rock.It Boy Entertainment are proud to present the cracklin’ hot country singer SHANE YELLOWBIRD with special guest CHAD BROWNLEE in concert on Thursday, May 6th at the Clarke Theatre in Mission (Ph 604-820-3961).  Tickets go on sale for $25 (plus Service Charges) on Saturday, February 27th at all Ticketmaster outlets.

SHANE YELLOWBIRD celebrated the release of his second album Its About Time (On Ramp Records 2009) by playing the Ryman Auditorium in the Grand Ole Opry in Nashville, Tennessee.  Not bad for the cowboy from Hobbema, Alberta who only released his first album three and a half years ago.  But what an album!

Life Is Calling My Name was released on 306 Records in 2006 and propelled SHANE YELLOWBIRD straight to the forefront of the Canadian country music scene with five great singles and videos, including “Pickup Truck” which spent ten weeks in the Top-10.  The album led Yellowbird to countless awards and accolades, including the coveted CCMA award for “Rising Star of the Year,” the “Best Country Recording” award at the Native American Music Awards (for North America), and the “Aboriginal Entertainer of the Year” award at the Aboriginal People’s Choice Awards (for North America).

‘Barefeet on the Blacktop,’ the first single from Its About Time became SHANE YELLOWBIRD’s fifth Top-10 single when it debuted at #10 on the Canadian Country Charts.  Now that Canada has found him, he has set his sights on conquering the US market, starting with the new video shot in Nashville for the latest single “Watching You Walk Away.”

“The Best That I Can Be (Superhero)” is the current single from CHAD BROWNLEE and also sums the way this talented young man approaches life and music.  Chad was looking to make his mark in the National Hockey League (NHL) and was drafted into the Canucks training camp in 2003 but was forced to retire early due to injuries. The NHL’s loss is the country fan’s gain because now Chad gives “a hundred and ten percent” of his energy to his music.