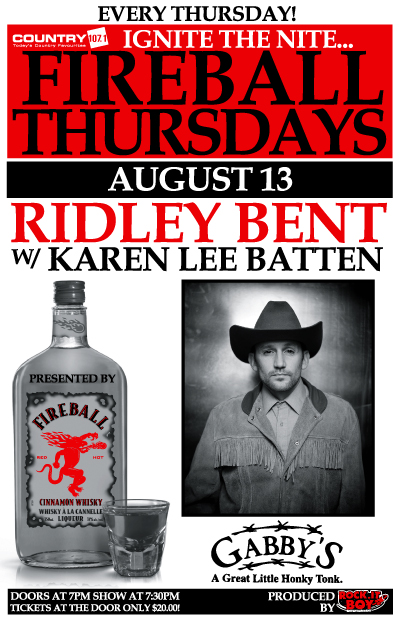 COUNTRY 107.1FM and FIREBALL WHISKY present RIDLEY BENT with special guest KAREN LEE BATTEN in concert at 7:30PM on Thursday, August 13th at Gabby’s Country Cabaret  in Langley.  Tickets are $20 at the door.

Open Road Records artist RIDLEY BENT is an entertainer, a crooner, a gee-tar player and a songwriter with a knack for wily wordplay and serious storytelling.  Love and betrayal, cowboy songs, songs of hope and glory, tales of the old west and pop culture, this is Ridley’s world, and you can hear all about this on his two albums Blam (2005 Maple Music) and ­Buckles & Boots (2007 Open road) or, if you are lucky, you can go to his live show and let him take you on a ride you won’t forget.

Born in Halifax, Nova Scotia to a military family, he took the ‘long road’ to country music,  immersing himself in pop culture and planning to be a professional skier.  Now that he has found his way back to the kind of music his dad always played on the old record player, he manages to incorporate stories that include punk rock and hip hop references all mixed in with thugs, drunks and rodeo stars without ever sacrificing the integrity of his sound which always has a sweet country swing pulling at your dancing feet.  If you like it new, original and always entertaining then RIDLEY BENT is your man.  Fellow Canadian songwriter Kate Reid says it all in her song, “I’d Go Straight for Ridley Bent” which she wrote in his honour.

Abbotsford’s own Karen Lee Batten has been gaining fans since she appeared on the first season of Canadian idol.  Her independent album Every Moment (2005) has produced four singles, including “A Bitter End” and “Hearts on the Run.” In 2004, 2005 and 2006 Karen won the BCCMA (British Columbia Music Association) award for Female Country Vocalist of the Year.