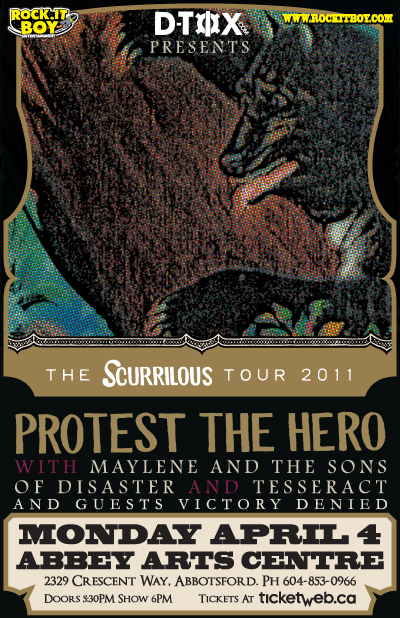 Maylene And The Sons Of Disaster, Tesseract

Protest The Hero with Guests Maylene and the Sons of Disaster, Tesseract AND Victory Denied

Advance tickets are on sale for $22.50 (Plus Facility Fees &Service Charges) from www.ticketweb.ca.

A Protest in Abbotsford!

Rock.It Boy Entertainment proudly presents The Scurrilous Tour with Protest The Hero and guests Maylene and the Sons of Disaster, Tesseract AND VICTORY DENIED on April 4 at the Abbey Arts Centre. Advance tickets are available for $22.50 (Plus Facility Fees & Service Charges) online at www.ticketweb.ca or $25.00 at the door.

PROTEST THE HERO will release their third studio album, “Scurrilous” (Universal Records), on March 22, 2011. “Scurrilous” is the widely anticipated follow up to the five piece band’s, Number one debuting 2008 sophomore release, “Fortress” (Underground Operations (Canada)), and reunites the band with producer Julius “Juice” Butty whose producing credits include the PROTEST THE HERO singles “Bloodmeat”, “Palms Read” and “Limb From Limb”.

Protest the Hero is a Canadian Progressive Metal band from Whitby, Ontario. Originally named Happy Go Lucky, the band line-up has remained the same since their formation in 1999. The band changed their name to Protest The Hero shortly before releasing their debut album, Search for the Truth, in 2002. Don’t miss PROTEST THE HERO as they rip up the Abbey Art Centre in this amazing show with their spectacularly original and bold approach to metal.

For more information on PROTEST THE HERO, please visit www.protestthehero.com.

In 2009, MAYLENE AND THE SONS OF DISASTER released “III” (Ferret Music) debuted on The Billboard Top 200 chart in its first week of release. Maylene’s brand of metal/hard rock has a decidedly Southern flavour, lightly sprinkled in some places and doused liberally in others. It’s good time, up tempo music with plenty of groove and melody. Songs like “Step Up (I’m On It)” which alternates twang and country fried metal and “Listen Up” with big hooks and a memorable chorus prove this band can rock!

MAYLENE AND THE SONS OF DISASTER is an American Metalcore band formed in 2004 in Birmingham, Alabama. The bands name and concept are based on the legend of the criminal gang of Ma Barker and her sons, noting that evil lifestyles will be met with “divine justice”. It was the 2007 release, their second album, the critically acclaimed “II” which expanded on this concept expounding on the true tales of 1920’s gangster Ma Barker and her prohibition era real-life crime family.

For more information on Maylene and the Sons of Disaster, please visit: www.mayleneandthesonsofdisater.us.

TESSERACT will confuse, bemuse, amuse and abuse you all in one song. Since the formation of this UK band in 2007, TesseracT has picked up richly deserved props from critics and peers alike. Following the release of their 2007 demo they continued to cultivate a growing International fanbase, through well received UK and European tour dates and their growing reputation of delivering jaw-dropping live performances. In the climax of 2009 the band found exciting new territory, with the recent addition of singer Dan Tompkins as evident with songs like, “Lament” and “Sunrise”.

In the beginning years, Victory Denied would play shows here and there but it wasn’t a huge part of their lives; however, as they played more and more it became apparent that people needed their unique hardcore music with intense thrash riffs and solid grooves so they immediately went to Vogville Studios to record their EP, “The Serpent”. Now, Victory Denied is ready to tour the world and share their brutal music with every metal-head that can handle its extreme force. Better bring a helmet!

Rock.It Boy Entertainment proudly presents The Scurrilous Tour with Protest The Hero and guests Maylene and the Sons of Disaster, Tesseract AND VICTORY DENIED on April 4 at the Abbey Arts Centre (604-853-0966), 2329 Crescent Way, Abbotsford. Advance tickets are available for $22.50 (Plus Facility Fees & Service Charges) online at www.ticketweb.ca or $25.00 at the door. Doors 5:30pm. Show 6:00pm.