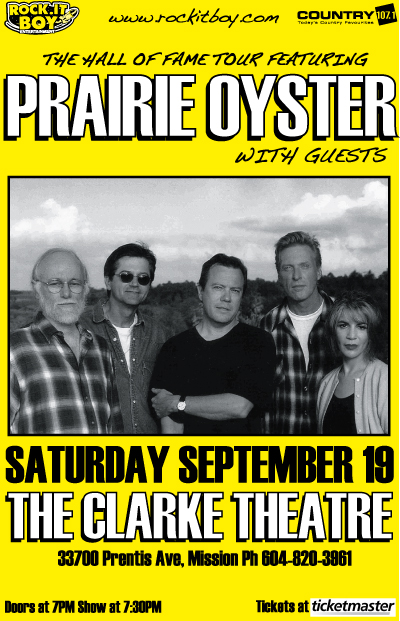 THE HALL OF FAME TOUR

Tickets $25.00 (Plus Service Charges) at Ticketmaster.

This is something to celebrate! Canada’s longest running western swing party was recently inducted into the Canadian Country Music Hall of Fame, and now PRAIRIE OYSTER is bringing the Hall Of Fame Tour to the road. Country 107.1 FM and Rock.It Boy Entertainment take pride in presenting country roots icons PRAIRIE OYSTER in concert on Saturday, September 19th at the Clarke Foundation Theatre in Mission. Advance tickets go on sale on August 8th for $25.00 (plus Service Charges) at all Ticketmaster outlets.

The band covers more bases than baseball, incorporating traditional country, western, swing, folk, bluegrass, a hint of jazz, blues, and even some gospel flavours, with a graceful ease.  PRAIRIE OYSTER originally formed in 1975 as a trio consisting of lead singer/bassist Russell de Carle, guitarist Keith Glass, and steel guitar player Denis Delorme, performing on television and playing live shows but never recording. In the early eighties they took on fiddle player John P. Allen and keyboardist/songwriter Joan Besen.  It took until the early nineties to finally be ‘discovered’ by Nashville and the resulting first album Different Kind Of Fire (RCA 1990), took them on a journey which has earned them hit singles and platinum records and a tally of six Juno Awards, eleven Canadian Country Music Awards and fourteen RPM Big Country Awards