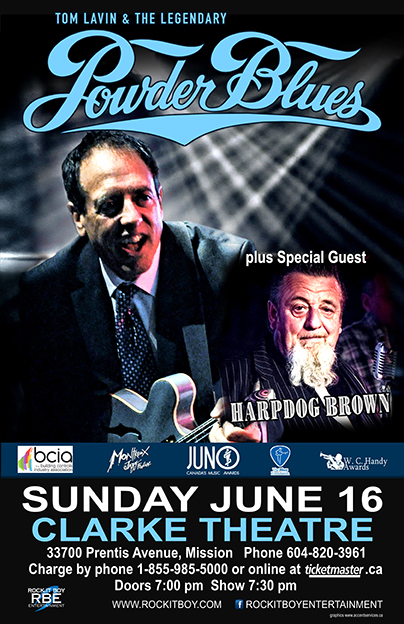 The Clarke Theatre in Mission Sunday, June 16
Tickets are $47.50 (Plus Facility Fee & Service Charges) at all Ticketmaster locations
Charge by phone at 1-855-985-5000 or online at www.ticketmaster.ca.

For more than four decades, their mix of Swing, Blues, Jazz, Rock and R&B has made POWDER BLUES Canada’s premier blues band. With non-stop tours through Canada, the U.S. and overseas they have spread their feel-good music with an appeal so wide that people from seven to seventy are dancing and shouting, swinging and swaying side by side. Who could forget the chart toppers “Doin’ It Right”, “Boppin’ with the Blues”, “What’ve I Been Drinkin”, “Hear That Guitar Ring”, “Lovin’ Kissin’ & Huggin’”, “Thirsty Ears”, “Farmer John” and “I’m on the Road Again”.

The band’s leader, TOM LAVIN has written many of the band’s best-known songs. He has won BCMIA Awards for Guitarist, Singer, Songwriter and Producer of the Year. Tom also has over a dozen gold and platinum records for POWDER BLUES, Prism, April Wine, Long John Baldry, Amos Garrett, and many others.

2019 marks the band’s 41st Anniversary. Their more than dozen CD titles and DVD have sold over a million records worldwide and continue to sell world-wide making TOM LAVIN & THE LEGENDARY POWDER BLUES one of Canada’s longest-standing musical ambassadors.

HARPDOG BROWN, a gifted singer and imaginative harmonica player, has been a strong force in Canada’s Blues scene since 1982. He’s crossed tens of thousands of miles playing club dates and festivals in Canada, North Western United States and Germany with such notable offerings as “Facebook Woman”, “Doncha Know I Loves Ya”, “Better Days”, “Moose on the Loose” and “Whiskey Bottle”.

Over the years Harpdog has issued 4 CD’s to critical acclaim. Back in 1995 his “Home is Where The Harp Is” won the coveted Muddy Award for the Best North West Blues Release, from the Cascade Blues Association in Portland. He is still the only Canadian to do so. A Juno Nomination for the Best Blues Release in Canada followed that same year. Teamed up with Graham Guest on piano, his CD “Naturally” was voted #1 Canadian Blues Album of 2011 by The Blind Lemon Survey. Most recently Harpdog was honoured with his second consecutive Maple Blues Award for Harmonica Player of the Year by the Toronto Blues Society. Add to that a second consecutive nomination for Blues Artist of the Year by the Western Canadian Music Awards. These are outstanding accomplishments that clearly solidify his rise in popularity and a new beginning in his career.

The album that delivered his first Maple Blues Award, titled “What It Is”, maintained status in the blues and roots charts throughout the year and in fact was ranked #20 worldwide Roots Music Report: Top 100 Blues Albums of 2014. Two songs on that album, “Whiskey Bottle” and “In My Younger Days” remained in the TOP 100 Songs for that same year. Harpdog’s original “How Come” is a fan favourite and earned regular rotation on BB King’s Bluesville on SiriusXM.