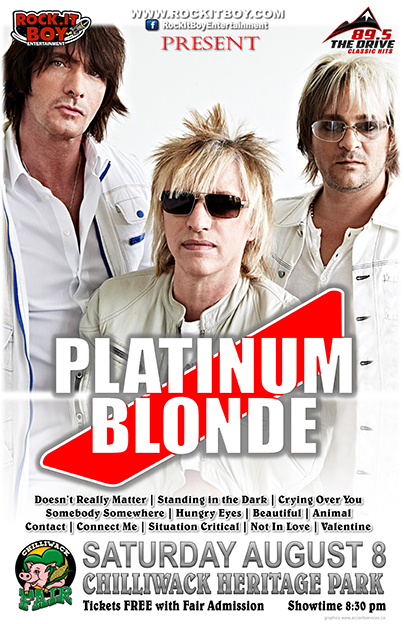 Standing In The Dark for free!

PLATINUM BLONDE is back, but this is no reunion. The band has simply taken its finger off of the pause button with the release of its new album Now & Never with the lead single “Beautiful”. The re-ignition of the band has been a very long time coming, but not for lack of demand. The appetite for their signature new wave rock sound has hardly waned since the boys pressed pause in 1991. The 2010 pairing of electronic dance tastemakers Crystal Castles with Robert Smith of The Cure to record a cover version of Platinum Blonde’s “Not In Love” saw an entirely new generation of fans clamoring to discover the band’s music.

PLATINUM BLONDE emerged from the club scene at a time when pop music was often adrift in flash and kitsch. Their debut EP Six Track Attack became CBS Canada’s biggest selling EP ever, hitting #39 on the Canadian Album charts. The EP formed the foundation on which triple-Platinum selling Standing In The Dark was built, hitting the airwaves with the hit singles “Doesn’t Really Matter”, “Standing In The Dark”, “Sad Sad Rain” and “Not In Love”. The quintuple-Platinum Alien Shores delivered the hits “Cryin Over You”, “Situation Critical”, “Somebody Somewhere” and “Hungry Eyes”. Further hits came with “Contact” and “Fire”.

Besides headlining their own shows on hugely successful national and international tours PLATINUM BLONDE also shared the stage with Brian Adams, Billy Idol, Red Hot Chilli Peppers and Blue Oyster Cult. Along the way the boys earned a number of accolades including Juno Award Nominations for Most Promising Group of The Year (1984) and Best Video for “Doesn’t Really Matter” and “Standing In The Dark” (1984) plus induction into the Music and Broadcast Industry Hall of Fame (2010) along with becoming superstars of Much Music and MTV. It’s easy to wonder what else is there is for Platinum Blonde to accomplish? As it turns out, quite a lot.